The summit meeting of Audio over Networks (ANET) takes place between April 11 and April 13, 2008 at the Banff Centre, Canada. ANET II moves into its second installment with the focus on music being made over distance. Tonality Systems UK in collaboration with the Interdisciplinary Centre for Computer Music Research, Plymouth University UK provides an update for summit delegates on its past and future telematic activities that seek creative solutions to the exacting and often necessary synchronicity of sonic events in distributed musical performance. 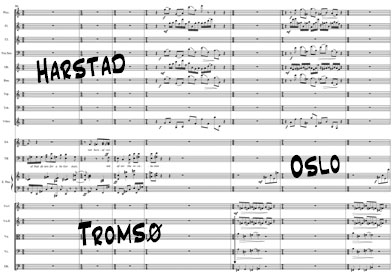 For more information about any of the works discussed in these pages e-mail Phil Legard at Tonality Systems.

The three remote ensembles of Conversations in Colour.

In 2001, Nigel Morgan and the BBC National Orchestra of Wales investigated the use of ISDN technologies to unite isolated groups of performers in rural Wales. This resulted in collaboration between Nigel Morgan and visual artist Joseph Hyde on Conversations in Colour: a triangular exchange of sounds, visuals and music between BBC NOW in

Cardiff and student ensembles in North and West Wales. In this instance, communications technology was
used as a practical solution to the geographic problems of an area whose transport infrastructure made it difficult for a large orchestra to work effectively with its constituent communities.

A sample of vocal writing from Schizophonia

The success of this project led to a co-commission from BBC NOW and the ILIOS Festival in Norway. Premiered at the 2002 ILIOS festival, Schizophonia brought together three remote ensembles in an ambitious five-movement composition. The ensembles consisted of choir (Det Norske Solistkor, Oslo), a wind band (Forsvarets Distriktsmusikkorps Nord-Norge, Harstad) and a string orchestra (Tromsø Symfoniorkester, Tromsø) directed by three ‘continuo’ soloists from BBCNOW. Drawing its scenario from the communications revolution that made such a performance possible, Schizophonia set texts from Sean Cubitt’s Digital Aesthetics and Esther Dyson’s Release 2.0 and the famous Vocalism poems by Walt Whitman. Schizophonia also incorporated aspects of digital media and proved that it was viable to perform a complex, large-scale orchestral and choral work requiring exacting synchronicities from ensembles in three ‘remote’ locations. Good news for orchestras and ensembles that daily face the physical and ethical dilemmas of long-distance travel. Both Conversations in Colour and Schizophonia took full advantage of the ISDN Codec technology of the time, a period when broadband was still to prove itself a viable medium for distributed performances.

However, despite the proliferation in recent years of broadband access and the increase in both speed and bandwidth , ISDN is still favoured by sectors of the broadcasting industry due to the reliable and stable nature of the platform compared with the unpredictable latencies and bit-rates of IP-based solutions.

Alan Thomas performing Continuum with Blues, and an image from the system showing parametric mutations.

Since the completion of Conversations in Colour and Schizophonia, Nigel Morgan has taken up the post as associate research fellow and composer-in-residence at Plymouth University’s Interdisciplinary Centre for Computer Music Research. As part of this role he has been investigating ‘Active Notation’ – a concept that with the intervention of digital and networked media promises to make the relationship between the composer and performer more dynamic and collaborative. Active Notation systems have already made possible performances of new scores in open-form and there are advanced plans to make Nigel Morgan’s cycle of Six Concertos available for the networking capabilities of E-stand technology.

Continuum with Blues (homage á György Ligeti) provides a wholly new experience to musician and audience alike with each performance of the piece throwing up new and intriguing directions and possibilities.Continuum uses Common Music Notation alongside more improvisatory, computer-generated graphics that lead to reinterpretation of the parametric content of the piece.

The MMU New Music ensemble both rehearsing and performing

More relevant to the area of digital communications and performance is the reinterpretation of Self Portrait 2002 for networked musicians. Using a set of networked laptops as virtual music stands, an un-conducted ensemble is able to direct and co-ordinate a lengthy open-form work. Within rehearsal, annotations made to the score (such as repeats and dynamics) and to the overall structure (the sequencing and reordering of sections that comprise the work) can be automatically distributed among the other computers in the network, significantly increasing the practicalities of rehearsing such a work and making ‘on the fly’ decisions about its interpretation.

It seems highly feasible that the two themes discussed here – those of distributed musical performance and Active Notation – could be combined in the future. This would provide an ideal platform for collaboration between remote groups. A staple of collaborative working, the ‘virtual whiteboard’ now becomes a virtual music stand, while individual parts are generated in accordance with the director’s intentions and the whole score may take on a more accessible and plastic nature within parameters set by the composer. The latest performing edition of Conversations in Colour will be in a paperless format, providing players with on-screen part-books able to respond instantly to interpretative decisions and interventions of electroacoustic and visual material. 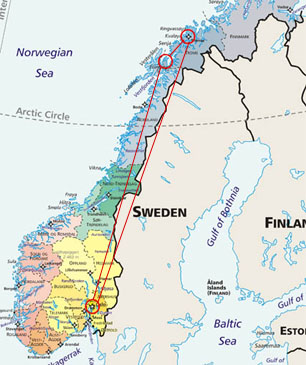 Re-conceptualizing Performance with ‘Active’ Notation, a lecture given at the ICCMR, Plymouth University, in January 2007 [pdf]

Location of remote ensembles for the premiere of Schizophonia.