This score for seven musicians is a staging post between the Quatuor de Timbres (2001) and the Six Concertos (2003-5). In this music the continuo trio developed for BBC commissions Conversations in Colour and Schizophonia joins the quartet of woodwind, brass, strings and percussion of Quatuor to make a seven-layer ensemble. This seven-layer approach to composing and organising timbre has become the compositional heart of each of the Six Concertos. Many of the technical features that have made the realization of the Concerto series possible had their inception in this work.The music was composed in ‘blocks’ or ‘panels’. The latter terminology makes reference to the music of Franco Donatoni whose scores sometimes demonstrate a very particular approach to open form. In Self-Portrait, as with a number of other compositions devised in collaboration with the Lisp-based computer environment Symbolic Composer, the composition is imagined in sections that are not in linear sequence but exist as autonomous ‘blocks’ having the potential for being placed in different orders, or indeed repeated, in part or complete. The music, however, should play continuously. Whereas Donatoni would have made a final decision about the sequence of his ‘panels’ before writing his full-score, the new technologies of scorewriting and MIDI sequencing of pitch and rhythm data make it possible now for players to receive a work ‘in open form’ and make their own decisions. 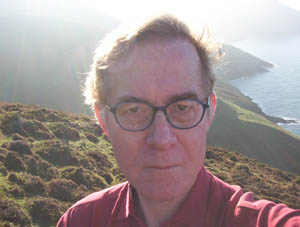 This ‘block composition’ means that an enterprising ensemble can re-order the music to explore the material from different perspectives. And this is not all. The music has been written to allow for realisations by ensembles of differing instrumentation, as long as an ensemble represents a mix of diverse timbres: this is not a work to be played by seven solo strings! For example, a possible alternative ensemble might be: trumpet, bassoon, viola, harp, electric guitar, electric organ and double bass. Although the version presented here is the composer’s ‘best fit’ ensemble, and parts are available for it, musicians can request a pair of part books in C: one for the quartet, the other for the continuo trio, from which to build their own versions. Midifiles are also available to enable performers to create their own parts within the standard scorewriting applications ( Finale, Sibelius etc)

here to launch it in a seperate window (may take a short time to load).

In late 2006 Self Portrait was realised for an ensemble of musicians at Manchester Metropolitan University, led by Julian Brooks, using networked laptops as digital score displays. The intention was to allow an  ensemble to work dynamically with an open-form work. In this realisation each player has a laptop that connects to a central ‘server’.
The conductor or musical director may use the server to send page-turn messages to update the player’s displays and may also force them to jump between the blocks that make up the piece. Furthermore repeated bars or phrases can be marked out on the score by the conductor/director and migrated across the network to the players. 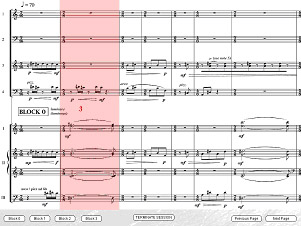 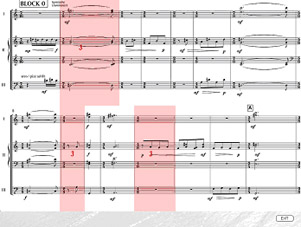 View of the score for player in the Continuo group

The network realisation of Self Portrait is part of continuing research into Active Notation and the use of digital score displays, which relates to the approaches to performance practice currently being investigated through the Instrumentarium Novum project. Future additions to the system will include footswitch control for solo or undirected players. It is also expected that a piece will be developed that uses  computer networks along with dynamic scoring as seen in Continuum with Blues. For more detailed information concerning Self Portrait for networked musicians, the system’s user manual is available to download below.

The software was developed to work on a TCP/IP protocol network of Windows machines (although a Mac version is a future possibility).

All that is required is a laptop for each player and for the musical director and a network hub with enough connections for each computer. Performers interested in using this software should contact Tonality Systems.

Manual for Self Portrait for Networked Musicians [pdf]

Re-conceptualizing Performance with ‘Active’ Notation, a paper from the 2007 ICCMR conference [pdf]