A guide to a significant collection of music made from this unique library of scales, modes and patterns

The Slonimsky Thesaurus of Scales and Melodic Patterns

The composer and lexicographer Nicholas Slonimsky (1894 – 1995) created this collection of nearly 2000 patterns to provide a comprehensive vocabulary of melodic phraseology for modern composers and performers. The contents, arranged in the form of a practical manual for pianists, can provide ample material for imaginative composition and improvisation. The materials are classified according to the division of the octave into two, three, four, six and 12 equal parts upon which highly ornamental designs are built.

John Adams and the Earbox
Nigel Morgan shares with American composer John Adams the occasional use of material from Nicholas Slonimsky’s Thesaurus. Adams has a special Earbox module built into his MIDI sequencer ‘so I can take any passage I’ve composed and multiply it by one of the modes in the Earbox to create a different colour or emotional effect’. Adams first employed ‘the Earbox’ in the second movement of his Chamber Symphony (1992) and subsequently in the Violin Concerto. He has even written a piece that celebrates his use of Slonimsky patterns called Slonimsky’s Earbox.

Whereas Adams uses the Slonimsky material to transform and colour already composed material Nigel Morgan works with the Slonimsky patterns from the very outset of the composing process. He often works with discrete series of patterns that follow through all possible permutations of a particular combination of pitches. The Slonimsky patterns offer the composer a pleasingly neutral yet highly ambiguous pitch continuum. Such patterns are equally at home in atonal and tonal contexts, which is one of the reasons why the Thesaurus has become so popular as a practice manual for improvisers, something that its author did not foresee.

Just as John Adams devised his own Earbox module built into his MIDI-based composing environment, so has Nigel Morgan created a special library that can be read by the Symbolic Composer software, a Macintosh application he has been involved in developing since the early 1990s. By looking at some of the annotations that have been made by Phil Legard of the composer’s Symbolic Composer score-files it’s possible to gain an understanding of how the composing process can work directly from Slonimsky patterns. 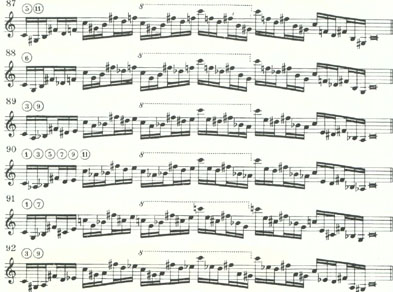 Omphalos for keyboard and percussion quartet

ARRAY: Compass for piano or keyboard with interactive system

Studies in Movement for solo cello

Vocalism for choir (SATB) and piano

Toccata I: The Universal Touring Machine

Toccata II: The Mobilisation of Sound

There are to date some 15 compositions by Nigel Morgan that use Slonimsky patterns as source material.  These range from Schizophonia, an ambitious BBC commission for distributed performance scored for voices, instruments and digital media, to the jazz-inspired vocal work Esther Dyson’s 12 Design Rules, to intimate chamber and solo pieces such as the guitar work Dreaming Aloud written for the remarkable American guitarist Alan Thomas. This five-movement suite provides an excellent introduction to how a series or sequence of Slonimsky patterns can permeate an entire composition.