For solo violin, viola or cello. 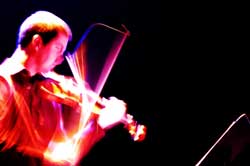 The first UK performance of Rising Falling was given by the violinist Darragh Morgan. He included Rising Falling as part of the opening recital at the Voices II – Peninsula Arts Contemporary Music Festival at Plymouth University in February 2007. Darragh Morgan has specialised in the performance of the new music for solo violin and has given many premieres including works for by Alwynne Pritchard, Christopher Fox, Michael Finnissy and Richard Emsley. Rising Falling is the only wholly computer-generated algorithmic work in Morgan’s extensive repertoire of 20 and 21C music for violin.

Rising, Falling was written in 1999 as a fiftieth birthday present for the composer Stephen Potts. Although the music was originally conceived for solo violin it has proved to be most effective in versions for solo viola and solo cello.

The title of the score comes from a sequence of descriptions that composer and author Sam Richards has applied to the elements that make up his own compositions: melody is ‘rising, falling, hovering’, rhythm is ‘rate of change’, harmony as ‘what happens together.

Rising, Falling is one of four works ‘about melody’ that share variations of the same title. In this piece the performer is asked to play all the rising phrases up-bow, all the falling phrases down-bow.

Rising, Falling is one of a number of works by Nigel Morgan that use source material from Nicholas Slonimksy’s Thesaurus of Scales and Musical Patterns (1947), a collection of several thousand examples much used by jazz musicians and composers. John Coltrane is said to have learnt them all! John Adams recently celebrated their use in his orchestral work Slonimsky’s Earbox. Rising, Falling employs pattern 5: a tritone progression (an equal division of the octave into two parts) with an interpolation of two notes.

from Rising, Falling for solo violin.

Other significant compositions written since 1991 that use Slonimsky patterns as both starting points and structural devices. These include the concert length Schizophonia, Conversations with Magic Stones for double bass and ensemble, Dreaming Aloud for solo guitar, Slonimsky Studies: Set 1 for solo piano and Interactions for piano left-hand. A complete list of Nigel Morgan’s Slonimsky-based works can be seen here.

This single movement work was created with the interaction of the Symbolic Composer software, an application co-developed by the composer.