For SATB and Keyboard, with optional Double Bass and Vibraphone

Esther Dyson’s 12 Design Rules is a part of Schizophonia – a 50 minute work for three â€˜remote’ ensembles and electroacoustic media composed for the 10th anniversary of Norway’s ILIOS Festival. It acts as a kind of â€˜cabaret’ interlude between a series of choral and instrumental movements. Schizophonia uses ISDN communications technology to bring together three simultaneous live performances in different locations, creating a fourth virtual performance on the Internet. Coordinated by a continuo group of three soloists and performed by wind, string and choral ensembles the music addresses fundamental conflicts in the spread of digital communications alongside issues of acoustic ecology.
The score makes reference to R. Murray Schafer’s The New Soundscape, and sets words from Walt Whitman’s Leaves of Grass, Sean Cubitt’s Digital Aesthetics and Esther Dyson’s Release 2.0. In Schizophonia the choral forces are reduced for the 12 Design Rules to four solo singers with accompaniment from the continuo trio of vibraphone, electric piano and bass. It may be performed live or be pre-recorded and presented as a kind of music video. The score presented here is for a stand-alone performance by a chamber choir and keyboard accompaniment with optional parts for bass and vibraphone. 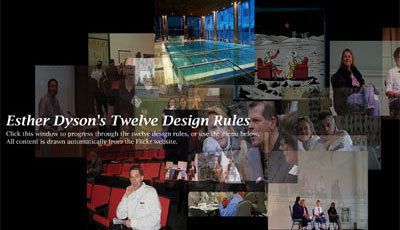 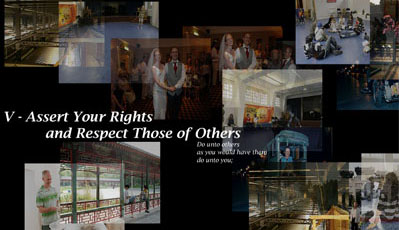 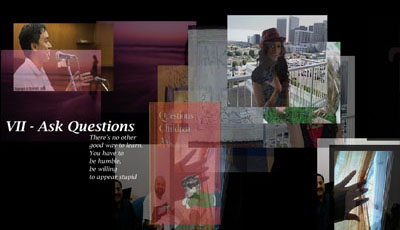 The presentation of Esther Dyson’s 12 Design Rules may be further enhanced by the use of digital media as part of a projection or installation surrounding the performance.

From this page you can listen to the piece and view examples of supporting media implemented by Phil Legard. In the spirit of Dyson’s work and as a celebration of the diversity of the Internet, this presentation pulls content from Flickr searches based on each of Dyson’s design rules.

Known variously as The Clean Up Queen or The Guru of the Internet Esther Dyson is one of the most remarkable and inspirational figures in commercial business today. Through her newsletter Release 1.0 and her annual PC Forum she continues to provide valued insight and common-sense advice to all those working with the Internet and e-commerce. The Design Rules form a reflective after-word to her book, Release 2.0. In this book she charts a personal journey to make sense of the Internet and inspire good practice in the business use of e-communications. Her journey has taken her from being an analyst on Wall Street to a freelance adviser to the former Iron Curtain countries where on her own initiative she set out to facilitate the growth of a vibrant and responsible Internet community.

12 Design Rules is one of a number of significant compositions written since 1991 that use Slonimsky patterns as both starting points and structural devices. These include the Schizophonia itself, Conversations with Magic Stones for double bass and ensemble, Dreaming Aloud for solo guitar, Rising Falling for solo violin, Interactions for piano (left hand) and interactive computer system, and Slonimsky Studies: Set 1 for piano. Nigel Morgan’s relation to the Slonimsky Thesaurus is discussed here. 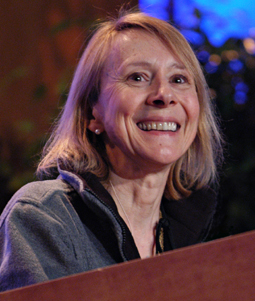