For SATB and electric piano. 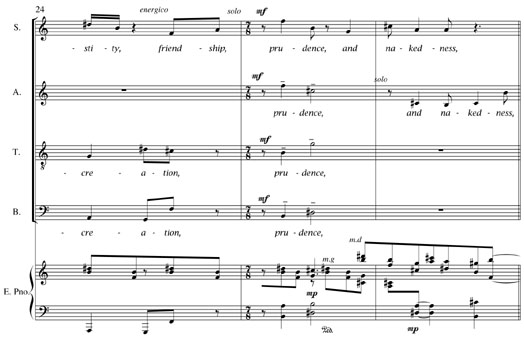 Vocalism is a part of Schizophonia – a 50 minute work for three ‘remote’ ensembles and electroacoustic media composed for the 10th anniversary of Norway’s ILIOS Festival. Schizophonia uses ISDN communications technology to bring together three simultaneous live performances in different locations, creating a fourth virtual performance on the Internet.
Coordinated by a continuo group of three soloists and performed by wind, string and choral ensembles the music addresses fundamental conflicts in the spread of digital communications alongside issues of acoustic ecology. The score makes reference to R. Murray Schafer’s The New Soundscape, and sets words from Walt Whitman’s Leaves of Grass, Sean Cubitt’s Digital Aesthetics and Esther Dyson’s Release 2.0. 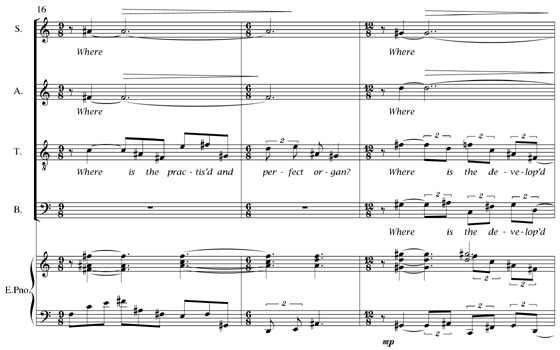 In Schizophonia the two principal toccata-like movements for the three ensembles are separated by three choral and instrumental movements: Esther Dyson’s 12 Design Rules and Vocalism I & II. Vocalism I is scored for choir and wind ensemble. Vocalism II is scored for choir with string ensemble. These two poems by Walt Whitman come from Autumn Rivulets found in his celebrated collectionLeaves of Grass. The poems are curiously prophetic of our time when now, at the turn of the Millennium, the spoken and written word has assumed both power and fallibility within the instantaneous phenomenon of world-embracing communications media.This stand-alone version for choir (SATB) and electric piano is a new realisation of Vocalism I & II. The earliest version of this score was conceived as an a cappella work and adventurous and skilful choirs have certainly performed it effectively without the keyboard part. Although an acoustic piano may be used with this score the very special quality of the Fender Rhodes type of dynamically sensitive timbre found on the electric piano is the preferred choice.  Vocalism is suited to a large body of singers of not less than sixteen voices. In the stand-alone version, however, the work has been presented effectively with six amplified voices and sound projection.