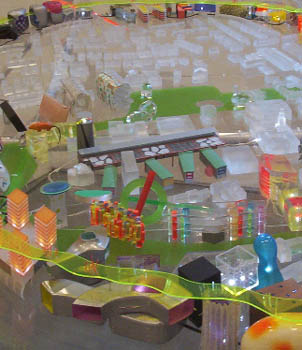 Objects of Curiosity is an expanding collection of single movement works for strings. Each of the three works planned to date focus on the vision of architects, their buildings and the way these structures animate the landscape.

Objects of Curiosity I draws on the work of British architect and urban planner extraordinaire Will Alsop whose visionary ideas came together in 2004 in a book and exhibition titled SuperCity. This originally formed a lively scenario for a string quartet with digital media written for the Kronos in 2004. This has now been expanded and reworked for string orchestra.

For the listener, experiencing this music is a little like walking around Alsop’s exhibition. Five exhibits have inspired particular musical ‘affections’ or expressive qualities and provide a kind of soundtrack. These are titled: with spirit and edge, like a slow dance, calm and sensuous, nervous and excited, full of  ife and colour. There are also a number of ‘objects of curiosity and wonder’, objects ‘to encourage dreams of what could be, and most importantly, encourage us to ask “what if . . .?”‘. However, the music is structured to ‘play’ with the kind of revisiting peculiar to exhibition viewing in which one frequently comes upon already viewed exhibits but from new and a different angles and directions. There ‘is’ a linear quality to this music, but it is in no way a conventional one. 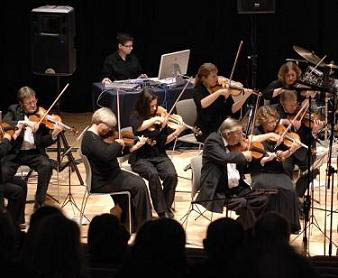 The UK premiere of Objects of Curiosity I was given by the strings of the Ten Tors Orchestra during the Voices III Peninsula Arts Festival in Plymouth in February 2007. As composer in residence to Plymouth University’s Interdisciplinary Centre for Computer Music Research Nigel Morgan gave a festival lecture on the background of this piece. The lecture titled Objects of Curiosity and the Composing Continuum can be downloaded here as a podcast or a PDF paper.

An important feature of Objects I is that the score has been written to encourage novel interpretations covering not only dynamics, articulations and changes of register, but the very ordering of the ‘objects’ and ‘affections’ that make up the piece. For such an open-form performance the composer’s Active Notation System can be used across a network of computer displays with the order controlled by a playlist or even chosen in real-time by the conductor. In the performance in St Andrews Church Plymouth members of the Ten Tors Orchestra decided to give the ‘affections’ sections to a concertante quintet (2 violins, viola, cello, double bass) with the ripieno ensemble playing the ‘objects’. This gives quite a radical reinterpretation of the piece that was entirely appropriate to the context of performance in a large church and in a programme where there was very little soloistic playing.

This extract shows the end of the largest section of ‘affections’ (marked with spirit and edge) and section J of the ‘objects’. The double bass part added into this version for string orchestra composed originally for string quartet has a truly independent voice. This demonstrates one of the advantages of working with computer assisted composition: the composer can recover every stage of the original creative process and remodel material accordingly for an expanded ensemble.