For Bass Voice and Piano

Deep Sea Diver is the first of three songs for bass voice about the ocean depths. The second and third songs set poems by Walt Whitman and Rudyard Kipling respectively. These
songs are part of a larger project, a rhapsodic work for bass voice and orchestra, telling the story of the human experience exploring the deep oceans through the words of the remarkable explorer and biologist William Beebe (1877-1962).

Robert Francis (1901 – 1987) was an American poet and friend of Robert Frost. Indeed, Frost said of Francis that he was America’s â€˜best neglected poet’. Francis produced just six collections of poetry, a novel and an autobiography of his early life. His poem Deep Sea Diver was inspired by William Beebe’s broadcast on national radio of one of his descents in the bathysphere off Nonesuch Island in the Bermudas. This Beebe recorded in his book Half Mile Down, from which the orchestral work takes its text. Beebe was well known to Francis through his many books recording his undersea exploration, notably his helmet diving adventures off the Galapagos Islands and Haiti. 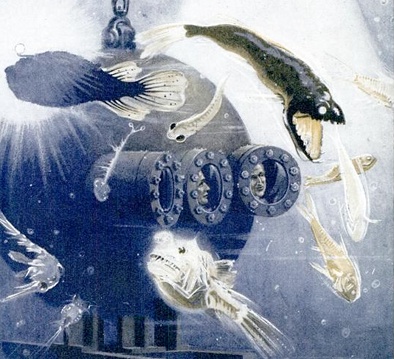 Beebe and Barton, beneath the sea (from Popular Mechanics, October 1931)

Down through the green

To the dark unseen

To the never day

Up through the green

The sun the seen

But in the clutch

Of your dripping hand

That we could swear

And would have sworn

Or could ever be

Blaze on our sight

The music of this song makes use of the technique of interpolation of tonalities and chords. Two chord pairs are defined for each of the two parts of the poem describing descent and ascent: 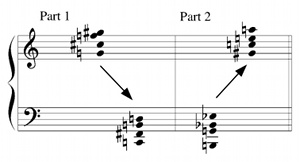 The composer investigates the novel harmonies interpolation of these chords can produce in differing degrees of intensity. In addition some of these newly generated chords are further distorted in a process likened to passing a modulated sine wave through the material.

Tempo, expression, dynamics and articulation are marked carefully for the piano, but the vocal part is left free of detailed marking so inviting the soloist to define his own.