For guitar and percussion.

In 1975 Nigel Morgan was commissioned to create the score for a production of the Early English epic poem Beowulf at the new National Theatre on London’s South Bank. It was a production with life-size puppets by Christopher Leith and a new verse translation by Larry Butler. The score involved two singers as narrators and two musicians playing harp (a copy of the Sutton Hoe instrument) and percussion. In 1978 the composer decided to reinvent the score as an instrumental fantasy: for guitar and percussion. This score was written for the composer/performers Nigel Morgan (guitar) and Patrick Brandon (percussion) and toured extensively as part of a programme featuring their music.

The music does not ‘tell the story’ of Beowulf but rather focuses on events that recur within the poem but in no particular order: the extraordinary fight scenes, the sea journeys; the formal dialogues between king and hero, the death of a hero. Three extracts from the original text are used as an underscore to introduce particular sections. 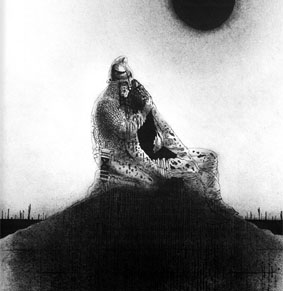 Dynamics and performance instructions are used only sparingly in this score. When they do appear they should be considered as a guide or starting point, no more. Performers might like to approach their parts as though actors in a drama. The guitar could be said to stand for Beowulf, the heroic male, the forces of good against evil. The percussion part is certainly the stuff of the monsters, the avenging mother, the dark forces of malignant marsh and mere. However, in the concluding duo for guitar and marimba both instruments weave intricate sea journeys, towards forthcoming fights and a hero’s homecoming.
In the original performances the guitar used was an amplified Stereo Ovation classical guitar. Amplification is encouraged in this work because of the extensive use of harmonics and resonances in the guitar part, but in intimate surroundings an unamplified performance can be magical. There is certainly no reason also why a steel-string acoustic guitar could not be used, and even an electric instrument might be considered.

The percussion part is for solo percussionist and is scored for marimba, congas, bongos, maraca, guiro, claves. The player is invited to add further instruments to colour the score further and to enhance the dramatic effect. The percussionist Rick Wilson, who accompanies the storyteller Hugh Lupton in his performances of Beowulf, underscores the poem with bells, gongs and native drums to great effect.
What needs to be remembered at all times is that the music should reflect something of the hard, aggressive edge and horror of the Beowulf poem. It is by turns chilling, proud, tender, heroic. The performers should also attempt to conjure up something of the age-old heroic style of story-telling which in the case of Beowulf was undoubtedly sung accompanied by a small harp.

There are many modern translations of Beowulf in print. The composer’s favourites are those in verse by Seamus Heaney and in prose (for children) by Kevin Crossley-Holland. On the Internet a good introduction to Beowulf can be found here. A version for harp and percussion is also available.