Eurus is the first part of a CD and concert music project composed during the summer of 2001. It was inspired by the activities of two ensembles: ArrayMusic of Toronto and members of RESOUND, the education and community ensemble of BBC National Orchestra of Wales bases. It was written to feature two musicians who improvise with computers, Jo Hyde (UK) and Eugene Martynec (Canada).

This work lies between the BBC commissions Conversations in Colour, and the Seven Magical Preludes for percussion ensemble, and the Ilios Festival / BBC Wales commission Schizophonia.

ArrayMusic and Eugene Martynec.
In June 2001 the composer visited Toronto, Canada and had the opportunity to make contact both with ArrayMusic and with the improvising musician Eugene Martynec who had, by chance, recently collaborated with ArrayMusic’s Henry Kucharcyk. By a happy accident the instrumentation of ArrayMusic and the BBCNOW ensemble proved to be almost identical. BBCNOW had recently worked with multi-media artist and improviser Jo Hyde. The concept of Eurus was to devise a flexible composition that might provide both ensembles with a variety of different options

and opportunities to go beyond the usual concert performance into studio recording, Internet presentation and even collaborative performance over ISDN or broadband media. The score encourages a wide range of possibilities: from an extended studio or concert work to collections of movements exploring almost all the possible combinations the instrumentations afford. In the current study score the default instrumentation is violin, double bass, clarinet, trumpet, mallet percussion and piano, though other instrumentations are possible and discussed in the score’s introduction.

The role of the improvising musician was to add a special dimension to the piece by making it possible for the scored music to be overlaid with improvised ‘flights’, dramatic tensions and interruptions
and commentaries. These might include extended media sources such as real-world sounds, electroacoustic material, even music theatre, visuals and texts. The improviser has no formal score but has a role both to unsynchronize the music, and partly to colour it with new and found sounds, sounds that connect in some way with the four winds and their territories, sounds that blow across and through the notated piece.
The title Eurus is the name given to the East Wind found in Greek mythology via Ovid’sMetamorphoses where there is an engaging description of the creation of the four winds:

The East is given to Eurus –

Arabia, Persia, all that the morning star

Sees from the Himalayas.

Zephyr lives in the sunset.

Far to the North, beyond Scythia

Beneath the Great Bear, Boreas

Eurus runs for about 16 minutes, and with the improviser’s contribution probably up to 20-25 minutes in all. Eurus is the ancient name for the East Wind, and as Ovid suggests, it encompasses a part of the world that, in the latter months of 2001 when this work was written, occupied the western world’s attention. Eurus is also the wind of Autumn. Like the scores that surround its composition,Eurus is generated directly from algorithmic procedures in computer code, using an object-oriented approach dubbed the Class System. Its thirteen sections add up to a toccata-like sequence full of energy and colour, but neither overtly dramatic or heavy (although the performers may decided to make it so), where the music is ‘touched’ (the meaning of toccata) rather than held on to. 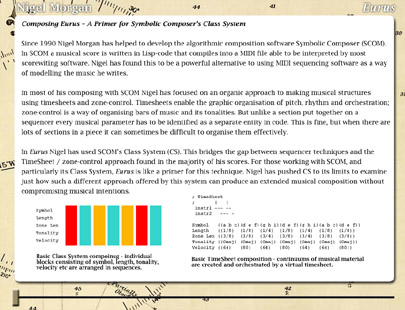 To find out more about the composition of Eurus, click here.