Between 1988 and 1991 Nigel Morgan created a sequence of four works, DUO (trombone/horn and percussion), TRIO (violin, clarinet and piano), QUARTET (string quartet) and EDGE (wind quartet). These pieces, forming a CD-length concert called TOUCHED BY MACHINE?, were part of a sustained project to explore computer-assisted composition using the tools of the MIDI studio.
DUO uses as its composition environment David Zicarelli’s M software. This software is one of the most successful attempts to create a device that enables composing through improvisation. Indeed, M is one of the few software tools that can be used for live improvisation with other instruments. In 2000-1 the composer performed a series of concerts with a free jazz drummer and bass player using 2 Apple Classic computers driving samplers and synthesizers all coordinated by the M software.
[TOUCHED BY MACHINE?]
[DUO]
[TRIO]
[QUARTET]
[EDGE]

In composing DUO the element of pre-composition lies in the preparation of data for the M software to store, process and then call up on-cue during an improvisation. The middle two movements (II and III) were devised entirely in this manner. What exists in the notated score is the result of recording improvisations triggered in real-time from a Stepp DGI MIDI Guitar. These recordings were made by M itself as MIDI data. This data was then transferred to a scorewriter using the MIDIfile protocol.
Movement II features the percussionist using a reduced kit of bongos, cowbell and woodblock set against long trombone pedal tones. The music ‘plays’ with ideas of open-form organization through exploring different combinations of material on two instruments simultaneously. Movement III is an extended improvisation for trombone accompanied by hi-hat and cymbals alone. In this movement aspects of pitch ordering, rhythmic incidence, dynamics and the trombone’s articulation were subject to Markov Chain processing by M during the course of the improvisation.
[TOUCHED BY MACHINE?]
[DUO]
[TRIO]
[QUARTET]
[EDGE] 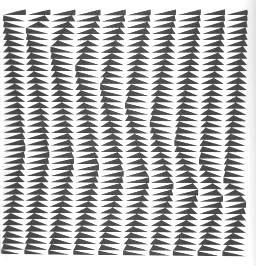 Surrounding the technical aspect of DUO there were two important elements: The first was the composer’s interest in the artist Bridget Riley, in particular her ability to engage the viewer actively in hermono chrome paintings and then later her work with colour stripes. In this work it is the viewer’s position in, and movement across, the pictorial space that appears to make the image ‘move’ playfully. The music that makes up all the pieces in the TOUCHED BY MACHINE? sequence attempt something of the same, only with sound and the listener. The four movements of DUO take their titles from a group of Riley’s paintings from the mid 1960s: Intake, Shift, Movement in Squares and Hero.

The second was peculiar to DUO itself. The work was commissioned with funds from the Eastern Arts Association for the trombonist Michael Kent-Davies. It was written for this soloist’s final degree recital at the University of Sheffield in 1988 where it received its first performance. During 1987 Michael had been involved in the premiere and subsequent early performances of the composer’s Metanoia for orchestra, a work that encourages its performers to have a closer involvement with performance decisions than is the norm. Michael was keen for his ‘new work’ to share something of the interpretative opportunities found in Metanoia and to investigate how a computer environment for composition might begin to model the improvisation process. For this reason the score actively encourages the performers to see musical information as a starting point and guide rather than as definitive instructions.