Quartet for Clarinet in Eb, Violin, Violoncello and Piano

Air and Simple Gifts, performed by Itzhak Perlman and Yo Yo Ma.

On 20th January 2017 the 45th President of the United States of America used his inauguration address to vilify the institutions and legacy of the previous administration, and in language with a vehement tone of delivery that was harsh, even offensive to some of those listening. To others it represented a robust declaration and promise to change the status quo and â€˜give power back to the people’. It was a far cry from the inauguration address of his predecessor who, before taking the oath of office, had commissioned a short piece, Air and Simple Gifts, from movie composer John Williams for performance by Itzhak Perlman, Yo-yo Ma, Anthony McGill and Gabriela Montera.

Vehemence takes the new president’s words and delivery of his inaugural address as its source material, mapping the very letters of his text to pitch and his spoken delivery to rhythmic phrases.

Vehemence joins four other works by the composer where a similar device has been used create novel harmonic sound objects.

The music is dedicated to Eric Wubbels and the composers of The Wet Ink Ensemble, New York City.

The opening bars of Vehemence
.

Whilst Vehemence assumes the presentation of a concert work in the Classical tradition an enterprising ensemble, wishing to extend the collected musical material into sonic territory, may wish to use amplification and include â€˜preparations’ for the instrumental ensemble.  For the piano, pitches D3 F3 C#4 D#4 and E may be prepared by threading dimes or 1p pieces between the triple strings. These pitches are marked with triangular note-heads on the first two pages of the piano part as exempla. For violin the
use of Blu-tack placed behind the bridge is suggested on strings D4 and A4 to destabilise the pitch on open strings.

The use of an Eb Clarinet is recommended to produce a vehement and insecure timbre.  In all instrumental parts (though particularly in the Eb Clarinet part) octave transpositions of melodic lines may be made as deemed appropriate for further emphasis and vehemence.

The score includes very few dynamics and additional playing instructions: playing a score having a general expressive marking with vehemence throughout does not give much opportunity for a dynamic range. 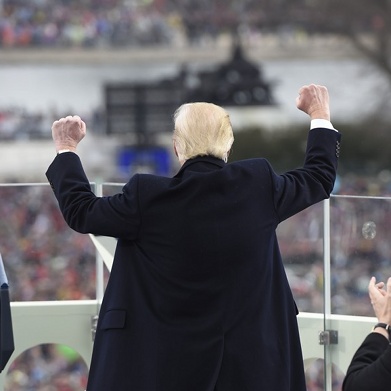 Articulation is another matter, and its varied execution is paramount. Although there are some markings of slurs, bowing, and the nature of attack and its duration, players should regard these signs as a starting point, no more. The players might consider studying the inauguration address itself, seeing themselves as either projecting a version of this address using musical means, or placing their personal response to its words and the character of its delivery into their performance manner and approach. In either interpretation Vehemence seeks to set a very contemporary event into the resin of time and music . . .