This is one of Barbara Hepworth’s sculptures from the mid 1950s, the time when she first came into contact with composer Priaulx Rainier. The sculpture carries the subtitle ‘Gloria’ and has resonances of an angelic form. The music is loosely based on two earlier works by Nigel Morgan that explores a description of melody by composer and writer Sam Richards, that of ‘rising, falling and hovering’ (also the title of a

celebrated painting by Paul Klee). Such descriptive words are commonly found in texts about angels.

The version presented here is for tenor saxophone, but may be realized on any solo instrument. In the recording and broadcast by John Cooper of BBCNOW a synthesized drone was added to support the performance.

â€˜Gloria’ is an angel paean.
To hear it cup your ears
and strain up and up.
A form built on a spring
turned in on itself and taut
as beginning bracken.
Between bent metal fences
lie clefts of privacy ancient
as green oak bark.
A shape of inner moment;
a bronze, containing wimple
that frames no face.
Gloria! Gloria in excelsis!
In ecstasy two stretched arms
have drawn into their haven
a needy treasure and an aperture
to open onto heaven
and the strains of angels
and with a slew and a spin
it will launch itself, an augur
testing eternity’s geology. 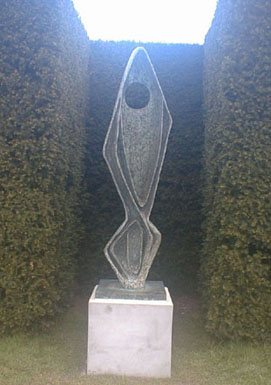