Please note: some links on this page are in maintenance.
An allegory is a form of extended metaphor in which objects, persons, and actions in a narrative are equated with meanings that lie outside the narrative itself. An allegory is a story with two meanings: literal and symbolic. The five Allegories featured here come from the Autobiography of G.K.Chesterton who believed that when young we see the world for what it really is, and then gradually become absorbed in pretence and make-believe, making reality elusive. He maintained that many of our memories take on in later life the stuff on allegory, they get thoroughly transformed and veil our original childhood visions.
We’ve all played the association game when a word is given to us to which we are asked to respond immediately and without deliberation. These allegories are each triggered in this composition by single words, which collectively seem to conjure up whole stories, sets of circumstances or weird chain reactions of thought. Key, Memory, Adventure, Dream and Impatience are presented as a sequence of short movements for string quartet that contain within them all kinds of emotional and musical references and devices. Some are these are really obvious, others may take time and experiment to uncover.

From the autograph of Mozart’s String Quartet in B Flat Major (K.859).

The harmonic world that these pieces inhabit is a long way from Mozart! The chain of tonalities through which the music moves has been devised to present a unique sound world where many of the normal conventions of harmonic practice simply don’t apply. As an introduction to this approach performers are invited to explore the composer’s work for solo piano called The White Light of Wonder. This is part of Nigel Morgan’s sequence of chamber works Childhood and Memory that take inspiration from the life and music of Robert Schumann.
The music might be approached as though it were the scenario for five short dramatic scenes to be mimed
by a group of actors. Mime requires much exaggerated movement and a real sense of needing to communicate with the audience. Thus, the musical instructions found in the score, such as dynamics, articulation, and expressive indications are to be taken as starting points, no more. An introduction to each of the five allegories can been found here. Allegories is dedicated to Nick Meredith, his colleagues and students taking part in WGHS String Club Project 2008.

Click on the images to explore the individual movements of Allegories: 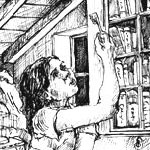 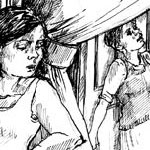 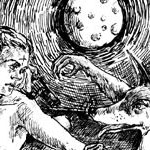 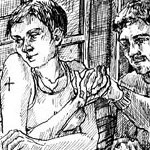 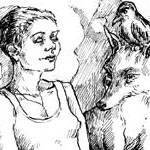 From the opening bars of Adventure.