For viola and chamber organ

Treeness is a single-movement work in four sections for the unusual combination of viola and chamber organ. It was commissioned in 2007 by the publishers A-R Editions for a new book on Music and Artificial Life. This book includes a chapter by Nigel Morgan on a composition for wind, brass and percussion called Heartstone. This 7-movement work composed in the early 1990s employed Lindenmayer Systems: algorithms using elements of natural language from which vivid artificial plants and trees can be drawn in 2D. For the book’s accompanying CD, a shorter single-movement chamber work was developed that presented the remarkable evolutionary-like patterning of the L-System algorithm in a more explicit and didactic way. Its unusual title Treeness is explained here:
In the early days of composing with Chaotic and A-Life systems there was a tendency to regard such work as a search for musical revelation, an entry into a new and different world of sound and structure. Some composers have reacted against this by working with dynamic non-linear systems that bring together the beauty and simplicity of fractal generation with extreme highs and lows of disorder. Heartstone makes a serious attempt to seek integration of modes and possibilities in organic modelling within the composer’s modus operandi…

For the composer his introduction to the beautiful tree-like structures visualised in 2D with L-Systems speak of the Gestalt of tree, a treeness more intense and exact than the living object, and able, because of this exactness, to be embedded as a structural mechanism to play in the musical imagination – with or without sounds.

A Short Introduction to L-Systems

Lindenmayer Systems, or L-Systems, provide a grammar for the construction of self-similar objects through the recusive use of simple substitution rules. For example:

If we begin with the symbol “A” and then use the above subsitution rules the following sequences will emerge:

Both Treeness and Heartstone use the same set of rules:

To the left is a graphical representation of these rules. For example: instances of B may interpreted as drawing a line forward, C as rotating 45 degrees, and so forth.

For more information about the use of L-Systems in computer composition please consult the annotated code for Heartstone available to download here. 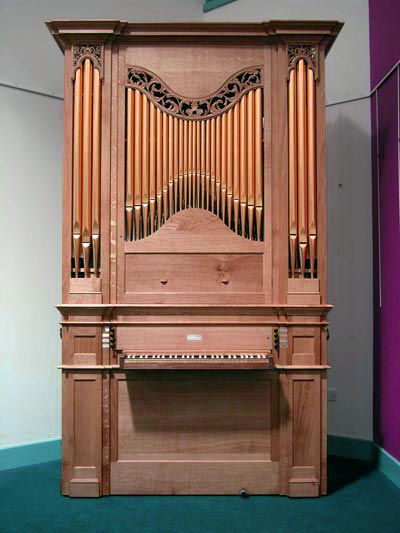 A guide to performance

The choice of the organ rather than a piano for this chamber work has encouraged a special approach to the notation of dynamics throughout the score. The players are to be guided by the expressive indications that preface each of section of the score and occasionally particular passages and phrases.

The use of the organ encouraged the composer to treat the L-System definitions like the so-called In nomine plainsong taken from Gloria Tibi Trinitas Aequalis found in many early keyboard pieces from The Mulliner Book. Sections L to N make the most explicit reference to this musical world with the viola playing like a viol the L-System definition as a cantus in the middle of the texture. Such references do clearly suggest a particular performance style – very simple registration and lively articulation from the organ and the absence of vibrato and restrained bowing from the viola.

Sections F to K, and O to the end, might be said to provide the very antithesis of such playing described above. The viola is encouraged to play most expressively behind the slow moving chordal textures, making much use of portamento, and the expressive slides and inflections common-place in late 19C and early 20C performance traditions of viola playing (a subject of special interest to the work’s dedicatee)

The chamber organ part was imagined for the Goetze and Gwynn instrument in Clothworkers Centenary Hall at the University of Leeds. This organ has a range of GG to e3 with 8,4 and 2 stops with a Sesquilatra and Cornet.

Performers should not feel restricted to the use of the chamber organ. Other keyboards may be used, particularly the kind of Fender Rhodes velocity-sensitive electric piano found in many of the composer’s works. If a different instrument is chosen, the composer would expect the part to be sympathetically re-imagined by the player.

Treeness was composed for the Taiwanese viola player HengChing Fang and the organist and pianist Daniel Gordon. These two musicians are closely associated with the Music Department at Leeds University. HengChing Fang is currently a PhD research student at the University of Leeds under Prof. Clive Brown. As a violist of the LUCHIP String Quartet, her area of research is performing practices of string instruments from late nineteenth century to the present day, and focuses particularly on the analysis of performing styles of Joseph Joachim, Lionel Tertis and William Primrose. Daniel Gordon is an experienced accompanist and repetiteur for Leeds University Music Department. He is also a specialist on the chamber organ with a particular interest in English organ music of the 16 and 17C. Find out more about Ching and Daniel here. You can also listen to the performance here.