= The White Light of Wonder: Scenes from Childhood – Nigel Morgan
Skip to content

from Maps of Fabulous Countries.

There is a small but fascinating repertoire of music for piano that is made up of pieces whose subject is childhood. Most of these pieces are miniatures and some have found favour with teachers and particularly diligent children. Schumann, of course, leads the way with his Kinderszenen, but there are other collections from composers as diverse as Dallapiccola and Nielsen. What the best of these pieces have in common is something that their music shares with the best of children’s literature: the ability to sustain the interest of the Young and the Old.
The White Light of Wonder pays an important debt to Schumann’s Scenes from Childhood, a debt acknowledged in the final movement. Schumann wrote his Kinderszenen – ‘nigh on thirty quaint little things’ he whittled down to thirteen. Liszt is said to have played them several times a week to his daughter ‘enchanting them both’. However, the scenes from childhood pictured within this work are those depicted by the author G.K.Chesterton in the second chapter of his Autobiography.

from The Things we Remember (are the things we forget).

An ambition in this collection is to provide music that can be played by both the enterprising young person and the inquisitive older person. The physical demands are never very great, indeed some of the pieces attempt to follow Nielsen’s example in his Klavermusik for Små og Store where the spread of each hand sought by the music rarely requires more than the interval of a fifth.
To help the pianist further the whole collection has been most imaginatively fingered and edited by Joan Dixon, a pianist who has had a long association with the composer’s music. One of the most experienced ABRSM examiners Joan gave the world premiere in 1998 of Nigel Morgan’s ambitious Touching the Distance. She is also the dedicatee of his Interactions for piano (left hand).

from A Lost Experience in the Land of the Living.

Throughout the collection harmony is the predominant musical feature, sometimes lurking behind the scenes to give a foundation for melodic and contrapuntal invention, sometimes clearly present and sounded out as chord sequences. However, using the word ‘sequences’ gives a false idea: chord objects would often be more precise. Each chord is a unique sonic object created to be played easily by two fingers in each hand. Only in the movement, which gives the collection its name, do the chords get any bigger!
In the first half of the collection the harmonic rhythm and content is quite rich, often between 12 and 24
different chord objects per piece. As the second half progresses the harmonic rhythm tends to slow down until in No.11 just two chords (taken from the prologue of Harrison Birtwistle’s opera Punch and Judy) provide the source material. The final piece explores inversions of chord objects as the music pours new harmony into the mould of Schumann’s Der Dichter Spricht.

from The White Light of Wonder.

For those who would like to explore the world of G.K.Chesterton further Martin Ward’s extraordinary website contains a cornucopia of Chesterton material, not least electronic versions of almost everything he published, and he published a lot! The White Light of Wonder is the first section of Childhood and Memory, a four part multi-media project celebrating the legacy of Robert Schumman in his anniversary year 2006. Kinderszenen and Dicterliebe have provided both a scaffolding and a starting point, embodying as they do reflections about innocence and the loss of what has once been loved.

The other sections of Childhood and Memory are:

Every Picture Tells a Story – Fantasy Piece for violoncello and piano

(a score with illustrations by Dette Allmark and poetry by Margaret Morgan is available upon request, in a limited edition of fifty copies)

The Man with the Golden Key [mp3] [midi]

The Things We Remember (are the things we forget) [mp3] [midi]

A Lost Experience in the Land of the Living [mp3] [midi] 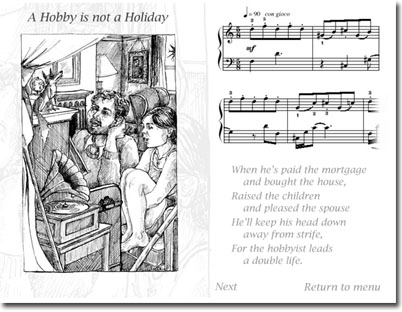