Gatto Marte is a chamber ensemble of classical background with an attitude close to jazz and a twist of folk music, from Eastern Europe through the Mediterranean towards the North. To say they are ensemble of violin, bassoon, piano and double bass hides the fact that at every turn of the page they
may transform themselves into something else – percussionists, vocalists, banjo-players, home-made instrumentalists, sound effects specialists – anything and everything that makes their music come alive: to tell stories, to accompany film and puppet theatre, to give new life to old songs and to invent new songs with echoes of past traditions and styles.
Nigel Morgan is the first composer from outside the quartet to be invited to write for this unique ensemble. He’s chosen to compose a 45-minute work as part of his expanding Facts of Life series. He’s chosen to write ‘The Facts according to Gatto Marte’! The score is a collaboration with technologist Phil Legard who will develop a series of software tools for the practice and performance of the work. 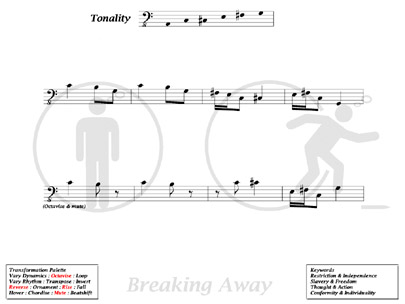 Working on variations of a bass solo in Fact Manual.

Some of Nigel Morgan’s previous work such as Continuum with Blues and Self Portrait have used ‘Active
Notation’ as a means of delivering the score to players using laptops and networking technology this makes collaborating on the actual structure of Open-Form work easy to coordinate during rehearsals and also allows players to explore the work and its musical language in more detail on their own terms, away from the rest of the group. The software for Facts of Life will have two components. The first of these is the Fact Manual, which gives the player the opportunity to explore their parts individually, guided by the computer which will present possibilities for improvisation on the core musical material.

This virtual approach makes it possible for the performer to shape a practice session by choosing the degree to which three musical parameters (pitch, rhythm, dynamics ) interact with each other on a given phrase. Players might wish to focus just on pitch and dynamics, leaving the practice surface uncluttered by rhythmic detail. 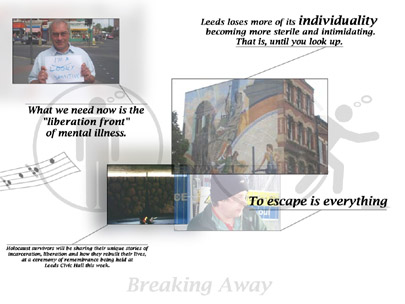 The Facts of Life drifting through local media on
the theme of “breaking away”.

For group rehearsal and live performance Live Facts is used to coordinate the players across a computer network. The each player’s laptop will present the musical material for the current ‘Fact’ and also allow them to interact with the flow of the music, the network making sure that all the players are notified of any changes in plan. Wherever the group play they can ‘point’ the Active Notation software toward online regional news sources. During the performance of each Fact, Pippo Lionni’s corresponding image will be projected, accompanied by text and images drawn live from these local media source, presenting new and surprising connections between Lionni’s archetypal situations and events in our daily lives.

This presentation of the local Facts of Life builds upon the visual element
f Nigel Morgan’s choral work Esther Dyson’s 12 Design Rules. This piece includes dynamically generated visuals based on searching the Flickr photo-hosting website for keywords in the libretto: you’ll never know what to expect due to the constantly changing content of the site. 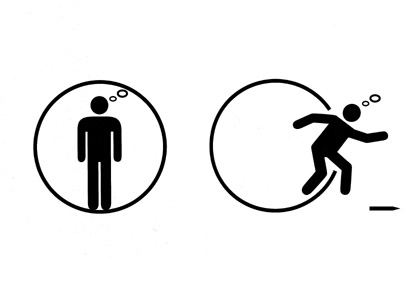 Breaking Away, by Pippo Lionni

This is a story in music of the members of a Quartet stating their individuality, trying to become four solo musicians. From a synchronised unison, whose texture is so dense and duration so short you can’t (easily) make out each instrument, there’s a kind of overture-like march that maintains this effect. As the march progress the whole texture gradually fragments into graceful polyphonic part-writing. This reveals the sound and character of each instrument. Each player also gets an opportunity to be a soloist against a three-part accompaniment, during which the entire compass of each instrument is ‘shown off’. The piece might end with interventions of the opening synchronised chord, only this time exquisitely played with longer durations and effects (trills, tremolos, dynamic change) so each instrument is clearly recognizable – even on a unison chord.

Introduction to The Facts According to Gatto Marte [pdf]