In August 2004 my brother-in-law a professional conductor married a concert pianist. Their unforgettable wedding held at London’s Arts Club was a wonderful opportunity to experience a real Jewish wedding, complete with a Klesmer band and much feasting and dancing. My gift to such inspiring musicians was this seven-movement work for piano duet, surely the most intimate of all musical combinations!
The Seven Nuptial Blessings or Sheva Brachot form the centerpiece of the marriage ceremony. They are recited as part of the wedding ceremony, at the conclusion of the wedding feast, and at certain meals which are held in the week following the wedding. In the ceremony the officiating rabbi fills a glass of vine and starts reading the seven blessings. Everybody has to answer “Amen” after every blessing. The bride and groom drink from the wine.. When the Seven Blessings are read the couple are officially married, and a groom breaks a glass in symbolic memory of the destroyed temple. The music in this score unashamedly makes reference to bell-like chords in Igor Stravinsky’s Les Noces, It was found that by combining the letters of the couple’s first names with that of the groom’s recently married brother and sister-in-law two Stravinskyian six note chords appeared. These chords announce each Blessing, except in the Sixth Blessing where the connection with Les Noces becomes explicit, not only in the style of the piano writing, but in a quotation (found in bars 63-65) from the final pages of that score that wonderfully contain these two chords.

Bride and groom must be the only married couple to have given a world premiere on the wedding day, playing at their wedding party the music for the Sixth Blessing they had only received less than 24 hours before! 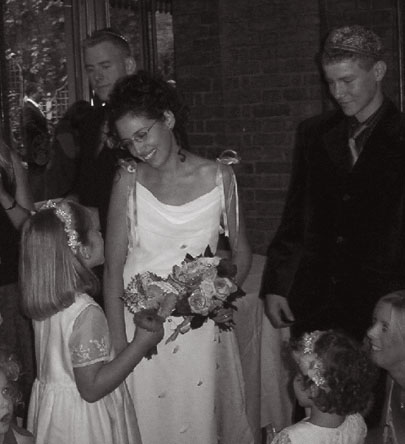 King of the universe, who creates the fruit of the vine.

King of the universe, who has created everything for his glory.

King of the universe, Creator of mankind.

King of the universe, who made man in his image, in the image of his
likeness,

and out of his body formed the woman, the eternal structure of reproduction.

Blessed are You – the Lord, Creator of mankind.

Blessed are You – the Lord, who causes Zion to rejoice through
her children.

Grant great joy to these your loving companions,

even as of old You gladdened Your first creatures in the Garden of Eden.

Blessed are You – the Lord, who gives joy to bridegroom
and bride.

Blessed are You – the Lord our God, King of the universe,

who has sanctified us with His commandments,

and has commanded us concerning illicit unions; who has forbidden us those
who are betrothed,

and has permitted us those who are wedded to us by the rite of the marriage
canopy and consecration.

Blessed are You – the Lord, who sanctifies His people Israel by
the rite of the marriage canopy and consecration. 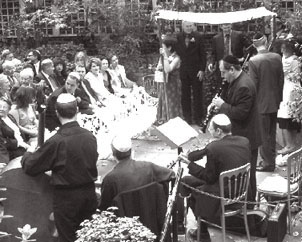 Danse CarÃªme presents a single movement essay for viola and piano based on the second movement of the composer’s recently completed Concerto No.4 (part of Instrumentarum Novum ).The title Danse CarÃªme (Lenten Dance) reflects something of the background to the Fourth Concerto – a work written during Lent and Easter 2005. The music is by turns troubled, reflective, impassioned; hence the many expressive markings found in the score. These markings are but indications not instructions. The performers are encouraged to look at the music as actors might view a text, pacing and interpreting the work to fit their developing relationship to it.

Danse CarÃªme is dedicated to the violist and composer Duncan Druce.

The music for Danse CarÃªme is based on the second movement of the Concerto No.4 (Instrumentarum Novum). This features the viola as a concertante instrument in an orchestral setting. The viola is written predominantly in the evocative lower part of its tessitura. There is an extended cadenza where the viola is accompanied by tuned and untuned percussion. The musical structure and argument is unique to the Concerto series so far. Four fifths of the score is an evolving chain of sequential phrases, the final fifth being a recapitulation of the opening fifth but with each successive phrase appearing to gradually overlay itself more and more prominently on top of the previous phrase creating a special compression and tension in the music.
Nigel Morgan is currently writing a number of new pieces for the Taiwanese violist HengChing Fang. These include a major concerto for viola and string orchestra as part 3 of the Objects of Curiosity series and a seven-movement contemplative work for viola and chamber organ based on Wakefield Cathedral’s unique modernist Nativity installation by Austin Wright and Theo Moorman commissioned in the 1950s. You can listen to performances by HengChing Fang here.