from them Second Magical Prelude

The Seven Magical Preludes were devised as an upbeat for a performance of the original version of Carl Orff’s popular choral work Carmina Burana. The instrumentation follows Orff’s own exactly, except in the use of the full compass of the tubular bells – Orff asks for just 3 pitches. If this is a logistical problem, a vibraphone may be substituted for the tubular bell part. In the Sixth Prelude, 2 players are required to play the single set of tubular bells. The seven Preludes should be played as a continuous whole. Dynamics, accents and tempo indications are a guide, no more. The music should be approached ‘in the spirit’ of Carmina Burana, like a sonic tableau acted out by six musicians. Stylised movements, gestures and other theatrical presentation are envisaged and welcomed. The first performance of Seven Magical Preludes was given in June 2001 by six members of BBC NOW in a concert given in Bristol Cathedral by the Bristol Choral Society. 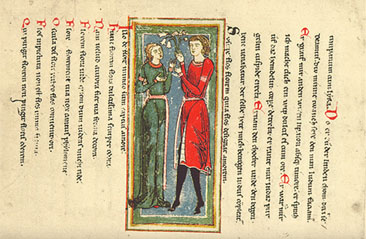 In the introduction to the published score of Orff’s Carmina Burana Werner Thomas describes how the poems Orff selected from the 13C Benediktbeuern manuscript are “brimful of portraits – vignettes as it were, of the great and small world theatre. Only by virtue of this characteristic could Orff – a surprising and strange approach – ‘stage’ lyric poetry in which he gave independent existence to the images inherent in the poems, let the figures emerge from them, and through the music allow them to act in a choreography that was both graphic and symbolic. The images are ‘imagines magicae’, in which reality is magically transformed: Spring – Dance in the meadow – Drinking and gaming in the tavern – The game of love in the sublimest form of the late Middle Ages ‘Cours d’amours’- in the choreographed and mimed stage action allow the core of the symbolic meaning to become visible.” 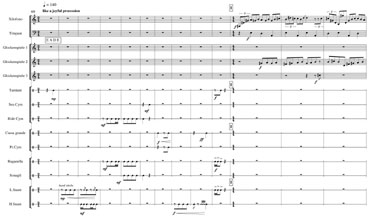 In these ‘magical preludes’ for the percussion ensemble Carl Orff himself selected for the version for 2 pianos and percussion, the music attempts a continuous sequence of images through engaging and extending the rhythms and colours possible through percussion alone. There is no use of direct quotation from Orff, only a consideration to steer the musical material toward a modal conclusion in the seventh prelude: to make, should the preludes be performed prior to Carmina Burana, a smooth transition into ‘O Fortunata’.