Between 1988 and 1991 Nigel Morgan created a sequence of four works, DUO (trombone/horn and percussion), TRIO (violin, clarinet and piano), QUARTET (string quartet) and EDGE (wind quartet). These pieces, forming a CD-length concert called TOUCHED BY MACHINE?, were part of a sustained project to explore computer-assisted composition using the tools of the MIDI studio. QUARTET is the result of interaction with a suite of software tools. Such tools allow music to be assembled in a way that has similarities to the process engaged by some visual artists when creating a series of related images. Once the components of a ‘design’ have been assembled a free application can begin using practiced and improvised gestures. So too in music composition: the composer can interact with simulated performance and experiment with different aspects, emphasis and structure before creating a notated score. In composing QUARTET the element of pre-composition lies in the preparation of data for the software applications to store, process and then call up on-cue during an improvisation.
[TOUCHED BY MACHINE?]
[DUO]
[TRIO]
[QUARTET]
[EDGE]

Screenshots from PVG and M

In creating QUARTET the composer worked with Emile Tobenfeld’s Programmable Variations Generator in Movement 1, Fingers in the latter parts of Movement III and IV, and
Tunesmith in Movement V. David Zicarelli’s M software was used for Movements II and the first part of III. Zicarelli’s software is one of the most successful attempts to create a device that enables multi-part composing through improvisation. It has now become part of the IRCAM co-development MAX-MSP.

Aside from the technical aspects of QUARTET’s composition there is an important extra-musical element to consider. This originates from the composers interest in the artist Bridget Riley, in particular her ability to engage the viewer actively in her monochrome paintings and then later her work with colour stripes. In these paintings squares, circles and lines are woven together into an optical symmetry that allows the pictorial space to oscillate and ‘dance’. Riley has described how the source of this approach comes from her mother who was ‘. . . a great looker . . . who constantly described everything she could . . . the play of sunlight on a glass . . . the depth of texture in the sea and sky . . .’ In Riley’s work the abstract shape becomes a living and vibrating expression of the natural world. It is the viewers position in, and movement across, the pictorial space that appears to make the image move playfully. The music of all the pieces in the TOUCHED BY MACHINE? sequence attempts something of the same, only with sound and the ear rather than the image and the eye. The five movements of QUARTET take their titles from a group of Riley’s paintings from the mid 1960s: Continuum, Shuttle, Fission, Late-Morning, Chant. 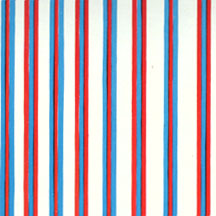