Six songs for soprano and piano, after the textile images of Janet Bolton

These six songs represent my first venture in creating my own words for music. Pleasing Myself began life following a talk and exhibition by Janet Bolton at the Saltaire Festival in 2009. I was smitten by the simplicity and charm of her textile ‘stories’, miniature quilts that played on and with my imagination. I wrote about my reaction to her images on the Internet and this particular ‘ blog’ continues to receive more hits per day than any other I have written. Janet’s textile images I now realise affect many people. They tell stories that relate to the gentle mainstream of personal and family life. When we view them they touch our memories and we invest them with our past and possibly, in what they say about children, our hopes for the future too. 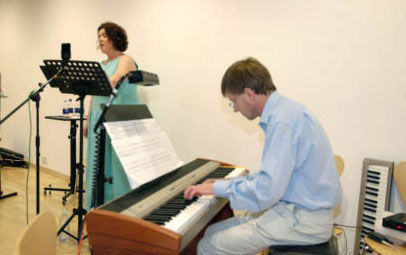 The poems I have written are influenced stylistically by Arthur Waley’s timeless translations of poems from the ancient Chinese, poems that I set as a teenager and which still resonate for me today as vividly as  they did 40 years ago. The music, almost wholly based on the motif and harmony of the opening bar, explores aspects of harmony someway between Purcell and modal jazz. The keyboard part may be played on electric piano, an instrument found in many of my recent scores including the song cycle Stone and Flower. Expressive markings, tempo, dynamics and articulation are to be considered as guides, no more.

Pleasing Myself was written for the mezzo-soprano and actress Philippa Reeves and the pianist David Appleton.

Illustrated with images reproduced by permission of Janet Bolton