Between 1998 and 2001 Nigel Morgan was visiting studio director at University College Bretton College, a college of the arts and education that became part of the University of Leeds. During the last 18 months of his residency his research assistant was the Japanese pianist Naomi Osuga for whom he wrote three compositions, two commissioned by Bretton Hall.

Interactions was commissioned specially for a recital given by Ms Osuga in June 1999. This recital was devoted to exploring how new interactive technology might contribute to extending the virtuosity of the performer. The programme consisted of works by Nigel Morgan, Karlheinz Essl and Robert Rowe. The decision to create a new work for piano left-hand was forced on the composer by an strain injury suffered by the pianist. As a result a five-movement suite of pieces evolved, threeof which were performed using Robert Rowe’s Cypher interactive system. This system, discussed in detail in Rowe’s book Interactive Computer Music, was a perfect choice for the performer who had previously no experience of such technology. In 2008 Cypher’s interaction library is probably best transferred to Max/MSP which gives the performer the additional opportunity to transform timbre as well as pitch, rhythm and dynamics and articulation.

The music may be performed with or without computer intervention. The choice of title refers not only to the technological interaction, but also to interaction between the chosen musical forms and techniques and the performer’s left-hand. Thus it can happily join the rather exclusive solo repertoire of music for piano left-hand that include works by Robert Saxton, Scriabin, Schuloff, Saint-Saens and Brahms.

Interactions is one of a number ofsignificant compositions written since 1991 using Slonimsky patterns as both starting points and structural devices. These include the concert length Schizophonia, Conversations with Magic Stones for double bass and ensemble, Dreaming Aloud for solo guitar, Rising Falling for solo violin and Slonimsky Studies: Set 1 for piano. All these scores are computer-assisted and involve algorithmic generation and processing of the Slonimsky material.

They exist in the first instance as score-files of computer-code, which can be viewed with specially written annotations by Phil Legard. For more information about the movements comprising Interactions click on the images below:

For her post-graduate studies at Bretton Hall Ms Osuga had chosen to explore how technology might become a partner in developing the virtuoisity of a pianist. She decided to explore the small but significant repertoire of music that used computers to provide real-time interaction with the pianist and to commission and perform new work in this genre.

In searching for an accessible model of interactive practice, innovation and compositional progression beyond the one-off experiment, the research and music of Robert Rowe stood out. His elegant and minimal software Cypher was recognised in Ms Osuga’s research as probably the only interactive software ideally suited to programming by a performer lacking any prior experience in the interactive medium. Rowe is also one of the few composer / programmers to have written with authority about the interactive medium.

With Cypher the computer listens simultaneously for six different features of the performer’s musical execution: register, speed, dynamics, duration, harmony, density. Imagine a single event consisting of high, fast, loud, staccato, C Major chords. Cypher analyses and classifies this input, and then the performer may configure a response by applying selected transformations through patching a feature or features to a transformation or transformations.

In the above example high notes will produce chords, soft dynamics will create trills, a single line texture (melody) generate tremolos and the note C# a flurry of grace notes and tremolo. 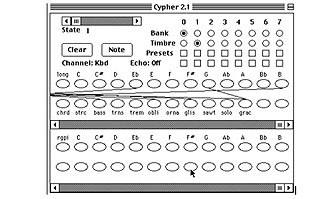 A Cypher ‘state’: the right hand portion of the interface showing the opening ‘state’ for Nigel Morgan’s Interaction-2.

Rowe has given careful thought to his taxonomy and arrangement of listening and playing modes. The system allows for an extraordinary complexity of data flow and interaction but also offers an accessible and easily learnable way into its use. It is important to stress that the musical event interaction component of Cypher is geared to the performer rather than the composer. The performer needs to act quickly, intuitively, on-line rather than off-line. The composer is used to the off-line, the reflective, and is more likely to have programming expertise. Regrettably, two elements of Cypher lie beyond the skill and patience of most performers: one is the matrix programming of instructions for timbral change, the other is the devising of conditions to be met by the player to operate automated sequential movement from one ‘state’ (a collection of patches) to another.

In Ms Osuga’s degree recital programme Cypher was used as the interactive medium for three out of the five movements of Interactions. Unlike Rowe’s own work Banff Sketches for solo piano, Nigel Morgan’s
Interactions for piano left hand employed a single but highly complex interactive ‘state’ for each movement. This simplified the devising process between composer and performer making it possible to gradually assemble an interactive state so that the performer could test each listening feature and each performance transformation to find exact tolerance of action and machine response. 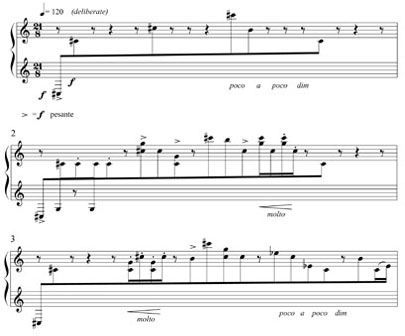 Selections from a performance by Naomi Osuga for keyboard and interactive
system: II [mp3] IV [mp3]