A song sequence for mezzo-soprano, flute and piano 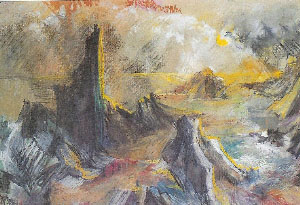 This work celebrates the experience of the painter and poet Ray Howard-Jones (1903-96) in a unique location, the remote island of Skomer off the South Wales peninsula. For nearly forty years she visited the island for several months at a time, often living quite alone, sometimes with the photographer Raymond Moore. Her relationship with Skomer and its environs is not only celebrated in many hundreds of her paintings and drawings but also in her poetry.

In the early 1990s when Ray Howard-Jones was in her late eighties her work was ‘rediscovered’ by Jonathan and David Stephenson of the famous Rocket Press. They not only brought together some five decades of her work in the 1993 Rocket Contemporary Art Retrospective Exhibition (at ‘The Gallery in Cork Street’, London), but published a monograph titled Ray Howard-Jones: The Elements of an Art and a collection of her poetry titled Heart of The Rock. 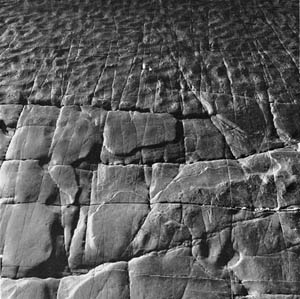 The musical setting assembles six poems from Heart of The Rock, tracing both a diurnal and seasonal journey: from night to day; from spring to winter. In the poems Benedictum and Morning in May the poet describes the progress from the utter stillness of night to the first glimmers of light in a new day. These poems are followed by an instrumental interlude taking its title Prelude to Reliving from the last line of Morning in May. This interlude is a reflection on Wordsworth’s two poems about the plant Love Lies Bleeding (Amaranthus), a plant found on Skomer Island in some profusion. The next two poems are set against midday and summer: Day Long Sun describes the artist swimming ‘on this fine polished jade of exultation’ and watching a gannet dive to catch a mackerel; The Heart is Knowing is a meditation on time and the tides. Creu (the verb ‘to create’ in Welsh) is a formal three stanza poem that most emphatically states the poet’s relationship with the natural world of Skomer. The sequence ends with Island of the Sword which speaks of the artist being ‘alone on the island ‘ and of the approach of night and of winter. 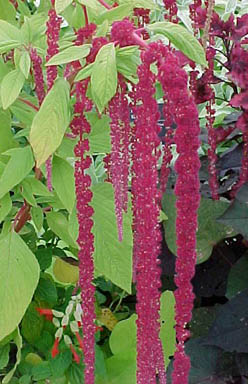 Listen to Prelude to Reliving

YOU call it, “Love lies bleeding,”–so you may,

Though the red Flower, not prostrate, only droops,

As we have seen it here from day to day,

From month to month, life passing not away:

A flower how rich in sadness! Even thus stoops,

The dying Gladiator. So, sad Flower!

(‘Tis Fancy guides me willing to be led,

Though by a slender thread,)

Of his death-wound, when he from innocent air

The gentlest breath of resignation drew;

While Venus in a passion of despair

Rent, weeping over him, her golden hair

Spangled with drops of that celestial shower.

She suffered, as Immortals sometimes do;

Who first, weighed down by scorn, in some lone bower

Did press this semblance of unpitied smart

Into the service of his constant heart,

With thine, and gave the mournful name which thou wilt ever bear.

Heart of The Rock was composed to enable its realization in four different versions. The rationale for this approach was to give the singer freedom to realise the work in a way most appropriate to different performance contexts. It is not a ‘song-cycle’ but a song sequence and as such should be performed as a continuous whole.

The versions possible are:

(using recordings made on Skomer by Frances May Morgan) 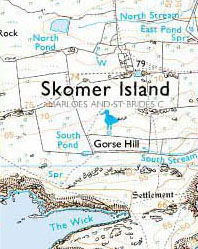 The version presented here is for voice, flute and piano. This is known as ‘the recital version’ and as this title suggests has been prepared to enable the music to be presented within a conventional recital of songs for voice and piano – with the addition of a solo flute. There are no differences in the vocal or flute parts between the duo and concert version and this recital version. The piano part, however, is another matter. Some of the changes are quite extensive and this version is not suitable for any other keyboard instrument but the standard acoustic piano.

Although the score is presented with quite detailed instructions for dynamics, articulation and tempo these should be regarded as starting points, no more. Furthermore, performers should experiment with applying an ‘ebb and flow’ tempo pulse to phrases throughout the work. The sound and the movement of the sea is a constant factor in any personal experience of Skomer Island and often seems to be present within the poems. If such sound and movement can somehow find its way into a realization of Heart of The Rock so much the better.