4.
Journey in a Logical Forest

This work was commissioned for Alan Thomas to perform at Huddersfield’s Electric Spring Festival in 2000. It is written as a kind of upbeat to Steve Reich’s celebrated Electric Counterpoint, a work Alan Thomas plays with a rare artistry. The starting point for the Preludes is not only Reich’s composition, but the sound of the jazz guitarist Pat Methany who first recorded Electric Counterpoint. The Four Preludes require a similar simplicity of sound and technical delivery as well as the same relentless musical synchronicity and democracy of musical events. The Four Preludes can be arranged in any order by the soloist as each prelude is based on the same complex tonality ‘shape’ (b 2 d 4 c# 5 b& 4 a 5 f 5 e 6). Throughout, the guitar plays with, and around, this tonality.

Four Preludes was written entirely in the Symbolic Composer music language and could be said to be a kind of primer for composition techniques within the system. The source code itself has been used in many workshops and tutorials as teaching and learning piece. Even the titles of the movements were computer-generated!

The subtitle ‘computer music for electric guitar and digital media’ hides the possibility of the work being given with live computer interaction, which it was at its premiere in Huddersfield. However, it has seemed more practical for the soloist, particularly when playing the music as an upbeat to Reich’s Electric Counterpoint, to issue the work on a digital media format (such as CD). This should not stop an enterprising guitarist from creating his/her own digital media part. Thus, the MIDI file along with the composer’s own realisation on CD of the computer part can be obtained on request. A downloadable study score of the guitar part will be available in 2008. 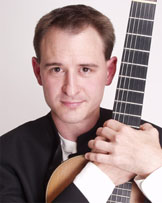 Listen to Alan Thomas play as part of the Active Notations concert at MMU.