This collection of miniatures for wind octet is based on a work of the same title for solo piano. It is more than an arrangement, but a whole new and different piece. Whereas the piano music is intimate, reflective  and offers a wide-range of interpretative possibility, the octet version is imagined for outdoor performance in the ‘drowned’ garden of the title. It is meticulously orchestrated to produce a spectrum of musical colour as vivid as the colours of the garden it describes.
Le Jardin Pluvieux is the garden of a celebrated Quaker meetinghouse at Brigflatts, just outside the town of Sedbergh in a southern corner of the Lake District. It is one of those special locations touched by history and already celebrated in the poem Briggflatts by the modernist poet and Quaker, Basil Bunting. 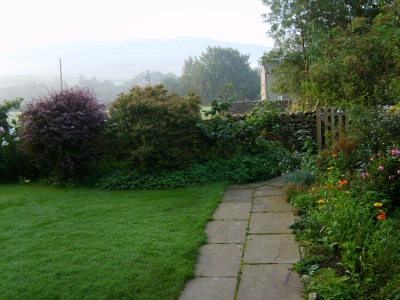 The garden at Brigflatts in Sedbergh after rain.

The idea for the work came from a suggestion made to a Sedbergh clarinetist, who directs an enthusiastic local wind octet, that she might like to try a contemporary work for this combination (pairs of horns, oboes, clarinets and bassoons) beloved of Mozart and his contemporaries. When the composer began investigating the 21C repertoire there was so little that the notion of writing something new took seed.
The composer discovered an inspiring recording of a series of octets recently attributed to Mozart. After listening to these works he made contact with the artists involved: the Canadian ensemble Festival Winds directed by James Campbell. Then and there he decided to write not one but two new pieces. Fifteen Images was to be the opportunity to learn how to compose ‘harmony music ‘ for octet. Serenade (Le Jardin Pluvieux) has been planned as a fully-fledged 5-movement work based closely on the form and play of instruments in Mozart’s C minor octet.

Extract from Image VII for piano.

The example above shows the piano Image that corresponds to the example at the start of this presentation. Stylistically the piano collection is quite unlike anything in the composer’s worklist to date. The music belongs to a genre of piano composition and performance practice that has its seeds in the piano pieces of Erik Satie, George Antheil, Morton Feldman, and more recently the music of Howard Skempton.
This is music all about the qualities of the individual moment, in which chords are sonic objects to be touched with care and their resonance and decay significant.
Le Jardin Pluvieux for solo piano differs significantly from this acknowledged repertoire in two ways: its colour-generated structure, and the invitation to extend the nature of an interpretation through responding dynamically to its musical content. The latter may be approached through improvisation, applying personal templates of tempo, dynamics, articulation and touch, by revoicing chords, using open-form devices, adding repeats and distortions.

The garden at Brigflatts.
The music of Le Jardin Pluvieux forms just one part of a site-specific project that will bring together all three compositions into an installation of music, images, texts and woven textiles. One feature of this will be to capture on digital video a live performance of Le Jardin Pluvieux by an octet playing in the Brigflatts garden itself. This will form part of an exhibition planned at Farfield Mill during August and September 2009 and on the web. A special introductory web presentation has been created by Phil Legard: to enable performers to enter into the world of Le Jardin Pluvieux. It explains how personal experience of this location and its environs have contributed to a gentle and reflective coming together of the musical and the visual, the spiritual and the tactile. The music’s titled has been chosen to indicate its relationship to an earlier work with Le Jardin Sec. This 5-movement piece for string quartet celebrates the walled garden at Norton Conyers that features in the novel Jane Eyre. The score is dedicated to the textile artist Jeanette Appleton .
Downloads