= Every Picture Tells a Story – Nigel Morgan
Skip to content

Fantasy Piece for Violoncello and Piano

One of the favorite ice-breaker questions asked in group workshops is ‘If your house caught fire and you could only save one possession what would it be?’ Many people answer without hesitation, ‘My photo album’. Every picture tells a story, and so much so that infant teachers begin introducing concepts of history by asking children to share photos of themselves as babies, and then to find pictures of parents and grandparents. The photo can say so much, not only about ourselves, but also about the world we live in aged four, fourteen or forty

This short fantasy piece is part of Childhood and Memory, a sequence of works written for the Robert Schumann anniversary in July 2006. It joins The White Light of Wonder (for solo piano), A World of Miracles (for violin and piano) and The Man with the Golden Key (for voice and piano or piano trio). 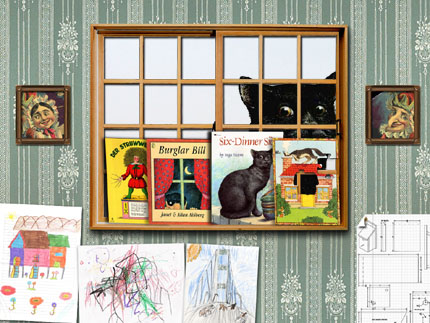 Every Picture Tells a Story is a conflation of the song cycle The Man with the Golden Key. It brings together a sequence of scenes that take their inspiration from a personal collection of photos, paintings, children’s drawings, and imagined images inspired initially by a chapter from G.K. Chesterton’s Autobiography. The work is also an extension of a piece of the same name specially written for Jane Chapman for amplified harpsichord and visual media. This digital visual media component may be used with this duo version. It comprises a series of 12 visual scenes devised as Flash media by Phil Legard.
In performance these scenes may be triggered by the pianist with a single keystroke from a laptop computer keyboard. A scene changes at each double bar in the score. The visual material presents a living room wall upon which a series of photos, paintings, drawings and animations appear (and disappear). Ideally this ‘wall’ should be projected on to a screen behind the performers.
DownloadsStudy Score [pdf]