Between 1988 and 1991 Nigel Morgan created a sequence of four works, DUO (trombone and percussion), TRIO (violin, clarinet and piano), QUARTET (string quartet) and EDGE (wind quartet). These pieces, forming a CD-length concert called TOUCHED BY MACHINE?, were part of a sustained project to explore computer-assisted composition using the tools of the MIDI studio. MIDI systems tend to encourage interaction with real-time processes: recording, improvisation, multi-tracking, complex layering, even sequencing, ordering and editing. However, the major factor of the composition act the composer wished to explore in TOUCHED BY MACHINE? was computer support for precomposition: the considered creation and organization of the discrete elements that make up the basic material composers use to create a musical score. That said, in the composition of EDGE there was a mixture of machine-led improvisation in multiple parts and the off-line manipulation of algorithmic processes of interpolation and transformation of pitch, rhythm, articulation and dynamics.
[TOUCHED BY MACHINE?]
[DUO]
[TRIO]
[QUARTET]
[EDGE]

EDGE uses as its composition environment two plug-in modules of the music sequencing software KCS (Keyboard Controlled Sequencer) created by Dr Emile Tobenfeld in 1985. The first module, responsible for the creation of the first section Improvisation, is called Fingers. This is essentially an improvising instrument controlled from the computer keyboard able to control four instrumental parts simultaneously. The second, known as the Programmable Variations Generator (PVG), was probably the first menu-driven algorithmic generator and editor commercially available that did not require any specialist knowledge of computer languages. This module was responsible for the second and third sections titled Interpolation and Transformation. PVG enabled the composer to explore quite elaborate ‘what-ifs’ in a multi-part composition. executed simultaneously, taking in conventional musical devices such as transposition and inversion as well as more novel procedures such as the application of Gaussian distribution and probability curves to musical parameters.
[TOUCHED BY MACHINE?]
[DUO]
[TRIO]
[QUARTET]
[EDGE] 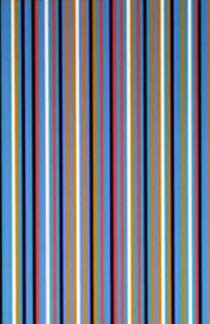 Surrounding the technical aspect of EDGE there were two important elements:

The first was the composer’s interest in the artist Bridget Riley, in particular her ability to engage the viewer actively in her monochrome paintings and then later her work with colour stripes. In her paintings it is the viewer’s position in, and movement across, the pictorial space that appears to make the image ‘move’ playfully. The music that makes up the pieces in the TOUCHED BY MACHINE? sequence attempts something of the same, only with sound and the listener. It is also something of a journey reflecting Riley’s artistic progress from black and white to colour.

The second was peculiar to EDGE itself. The score was commissioned with funds from the Eastern Arts Association for the Woodnotes Wind Quartet, an ensemble of post-graduate students from the Guildhall School of Music in London. This ensemble proposed a piece that might allow for more confrontational aspects of performance than is usual for the wind quartet. The use of unusual playing techniques, along with the use of amplification and electronics was discussed, as was the physical disposition of the players, particularly the dramatic effect of standing rather than sitting to play.

In the central movement of EDGE titled Interpolation a drum machine, or prerecorded CD track is scored into the music. The use of this element is optional in performance but obligatory in rehearsal – to encourage the idea of playing in and against the tension of a fixed ‘beat’. In the first performance a tape was triggered from an on-stage beat-box such as used by street dancers. In this revised edition of the score a CD-track, enhanced by samples and electroacoustic effects, has been prepared by Phil Legard, although ensembles are encouraged to create their own version of this electronic accompaniment if they so wish.