A Motet for the Feast of the Immaculate Conception
For solo soprano, choir (SATB) and chamber organ

The Lord possessed me in the beginning of his ways. . .

and I was already conceived . .

When he prepared the heavens, I was present:

I was with him forming all things:

and was delighted every day,

playing before him at all times;

blessed are they that keep my ways.

Hear instruction . . . and refuse it not.

Blessed is the man that heareth me,

and that watcheth and waiteth

and shall have salvation from the Lord.

The dogma of the Immaculate Conception of the Virgin – not to be confused with the Virgin Birth of Christ – is to the effect that Mary was conceived without inheriting the taint of Original Sin, which has descended to all other human beings from Adam and Eve. It is no wonder that the proper for the Mass for the feast of this mystery has, as its Epistle, the Dominus possedit me passage from Proverbs 8: 22-31, in which Sophia (Wisdom), the handmaid of Logos (The Word), declares that she was ‘set up from eternity’ and that ‘he who shall find me shall find life’. For the miracle whereby the Virgin is free from original sin, that she never ‘missed the mark’, is clearly that she is of heavenly or divine origin. Like the Son, she was ‘begotten before all worlds’, for ‘I was set up from of old before ever the world was’. (from Alan Watts: Myth and Ritual in Christianity. Thames & Hudson 1954) 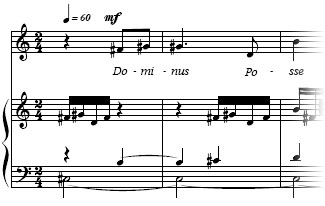 This setting of words from The Book of Proverbs brings together both a declaration and exhortation: that the spirit of wisdom has existed since time began; that we should ‘hear instruction . . . and refuse it not’, and through hearing, watching and obedience life and salvation may be found.

This Motet was composed for the installation of the Dean of Wakefield, the Very Revd, Jonathan Greener on December 8, 2007 – the Feast Day of the Immaculate Conception. In a collaboration with the artist Steve Simpson this motet brings together sounds and images that have resonances of the Eastern Orthodox tradition, a tradition celebrated by Wakefield Cathedral in its links with the Church in Georgia and Romania. 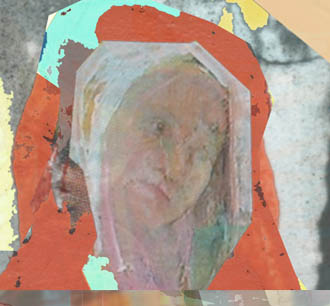