The four projected Chicago Quartets are inspired and to some extent modelled on twelve compositions by George Friedrich Telemann known as the â€˜Paris â€˜ Quartets. It follows directly from Nigel Morgan’s
Twelve Fantasias without bass for a soprano instrument itself based on Telemann’s 12 Fantasias for flute. Although titled as quartets this new music is actually scored for six players, two being part of an optional continuo. The work exists in two forms, one for a modern ensemble of flute, violin, bass clarinet, violoncello, electric piano and vibraphone, a second for baroque ensemble for baroque flute, violin, viola da gamba, violoncello, harpsichord and baroque guitar. Telemann’s own edition is in four parts, but is commonly performed with at least five instruments. 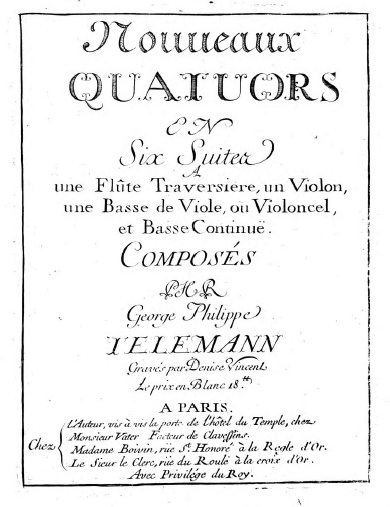 Telemann wrote two sets of Nouveau Quatuors en Six Suitea Ã  une Flute Traversiere. un Violon, un Basse du Viole, oÃ¹ Violoncel, et Basse ContinuÃ« during a year spent in Paris in 1737-8. He assembled an ensemble of French musicians to play these compositions; what we might now call a super-group of the leading virtuoso performers of the time.

‘If only words were enough to describe the wonderful way in which the quartets were played by Herr Blavet (flute), Forcroy [Forqueray] the son (viola da gamba), and Edouard (cello)”, Telemann recalled in the following year, ”Suffice it to say they caught the attention of Court and city in a big way, and almost at once earned for me almost universal respect accompanied by boundless courtesy”.

Telemann no doubt played the continuo part from figures beneath the basso, the common practice of the time.

Just as Telemann brought together the finest players of the city of Paris, so too have the Grammy winning ensemble Eighth Blackbird assembled a brilliant group of Chicago-based musicians. Taking their name from the poem by Wallace Stevens this sextet have specialised in performing new music with the energy and sonic spectacle of a rock or jazz ensemble. Their most recent project Hand / Eye celebrates a unique collection of contemporary art held in the city of Chicago. In composing his Chicago Quartets Nigel Morgan has taken the lives and work of four people who have direct connections with the city of Chicago: George Steiner, Frank Lloyd Wright, Jane Addams, Philip Dick. In the first Quartet presented here the philosopher and essayist George Steiner is the focus, or rather his chapter from his autobiography Errata on attending the University of Chicago as undergraduate student in 1947. This chapter is a virtuoso piece of writing in itself, and it is his words that provide the titles for each movement, whilst the music retains the form and expressive markings of the Telemann original (the Suite in B minor TWV43).

Megalopolis of Pure Intensity describes the city itself, Pilot Fish is the term Steiner uses to describe his relationship with the former Marine Archie, Scholar explains Steiner’s experience of learning about the sciences, Discovering Difficulty refers to an epiphany moment when trying to read the opening paragraph of Martin Heidegger’s Being and Time, Nights Becalmed describes Chicago on a very hot summer’s night, and finally Sirens Singing tells of Steiner’s initiation into teaching. Such titles are only loosely hung on movements that observe the tempo, structure and dance forms that Telemann used. But there are in each movement particular elements of distortion and parametric reassembling employed to create a very contemporary character to the music: that the musicians of today might enjoy something of the kind of joyful â€˜play’ of ensemble writing that Telemann was brilliant at providing for his musicians. This will be the challenge and deliberation of the Chicago Quartet series. Often the distortion is rhythmic or metrical, bars are expanded and contracted (in Scholar a Fibonacci generation is used in the rhythmic material), harmony is â€˜stretched’ and altered (Nights Becalmed), and new tempo relationships explored within a metrically modulated Menuet (Siren Singing).

The music contains the very minimum of performance information. The dynamics, tempo markings and articulations are starting points, no more. The compass of all instruments lies within those of the standard baroque conventions so on modern instruments these may be extended or varied and other instruments may be added (piccolo, alto flute, viola, saxophones and different mallet and percussion instruments). The electric piano is preferred, and an instrument with a Fender Rhodes sound and touch. Electric Guitar may be used instead of or in addition to the mallet instrument part. Some ornamentation is present but players are encouraged to add their own as appropriate, and indeed pursue extemporisation should they see fit.

The score is written in C.

The project is dedicated to Chicago’s Eighth Blackbird and London’s Dr. K Sextet (an ensemble led by the pianist Alex Wilson.) The score was fashioned in its entirety using the algorithmic software Symbolic Composer.