For Soprano and Alto Voices with Chamber Organ

Ut Queant Laxis or Hymnus in Ioannem is a plainchant hymn to John the Baptist probably written by Paulus Diaconus, the 8th century Lombard historian. It was used by the Benedictine monk Guido d’Arezzo (990-1050) to teach the musical scale, thus creating the System of Solmization (sometimes called the Guido System of Syllables). In listening to the monks singing this hymn, Guido observed that the first syllable of each line of the hymn formed one of the sol-fa syllables of the scale as we know it, and that taken successively they formed a six-tone scale — ut-re-mi-fa-so-la (C-D-E-F-G-A). The scale names given by him have remained to the present. Later ut was changed to do. The seventh tone, si (now called ti) was formed from the two intitial letters of the two last words, “Sancte Ioannes.”

In the Roman Catholic Church, the hymn is sung in the Divine Office on June 24, the Feast of the Nativity of John the Baptist. The full hymn is divided into three parts, with Ut Queant Laxis sung at Vespers, Antra Deserti sung at Matins, O Nimis Felix sung at Lauds, and doxologies added after the first two parts. 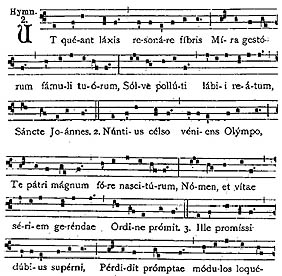 In this new setting for women’s voices and chamber organ the scale scheme observed by Guido d’Arezzo is maintained, but unlike the original the hymn is throughcomposed allowing for each verse to be set in an individual manner. The translation was specially commissioned from the poet Margaret Morgan.

Ut Queant Laxis was written for the girls’ voices of Wakefield Cathedral Choir and is dedicated to Canon Missioner John Holmes and Lay Reader Rosemary Holmes on the occasion of their retirement. 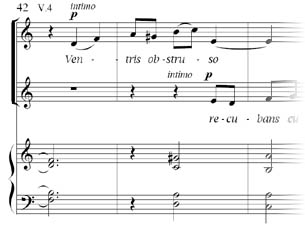