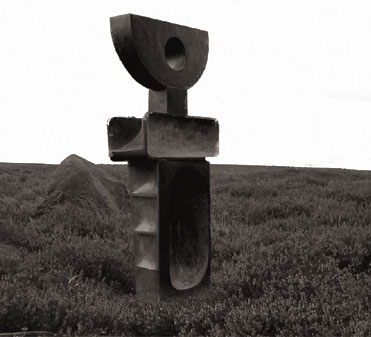 At the moment of the Fall, Adam

knew himself different by aeons

from the womb that bore him.

At the moment of the Fall, Adam,

in some primeval pool mirrored,

saw but one likeness, himself,

in the image of his maker.

How otherwise? But he

was that man who,

having seen his reflection,

goes his way and forgets

what he has seen,

leaving us to seek traces,

wherever we can find them,

of the kingdom in ourselves. 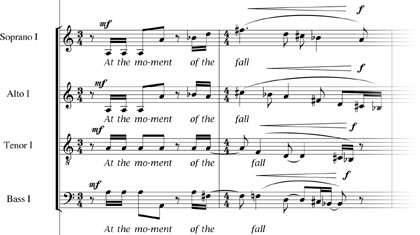 The opening bars of Ultimate Form describe the Slonimsky pattern 658 in its entirety. The pattern is the first in a series of six known as a Quadritone Progression – an equal division of two octaves into three parts. Pattern 658 is c c# g# a e f transposed here down a minor third into A.

The above example illustrates the way in which choir II is used to amplify and further articulate the text.

[Returnto Nine Figures on a Hill]