for tenor voice and chamber organ

The Wakefield Nativity, or Christmas Crib, was designed and made in the 1950s and restored in 1999. It is the work of the sculptor Austin Wright and the weaver Theo Moorman. It departs from the conventional representation by substituting the Shepherds in the central group, with the Three Wise Men. Who, following the ancient tradition, are depicted as the Three Kings, thus anticipating the Epiphany which concludes on Twelfth Night.

The setting is that of a seven-roomed open structure, similar to some of the buildings in which the Nativity was housed by painters of the fifteenth and sixteenth centuries. Above the central panel can be seen the shepherds, stirred by the excitement of the scene below. A number of figures suggestive of the present time are shown: in the top left-hand panel a choir sing their carol of praise, others gaze at the star while, on the right on the ground floor, is represented the Family in every age, who find Bethlehem their inspiration and assurance.

The surrounding tapestries, designed and woven by Theo Moorman add to the scene various Christmas motifs, including a representation of the Annunciation of the Blessed Virgin. The whole setting draws attention to the central figures of the Holy Family, with the Babe in his Mother’s arms, and contributes to the mystery and reverence of the theme.

For nearly twenty years this installation of sculpture and tapestry has contributed to my developing experience of a Christian life. I can rarely pass it by without placing myself before it in reverence. It seems a whole world unto itself, the whole story of the Gospels in a tableau of figures on a stage set that speaks of God’s relationship with man, women, children and nature. One year I set myself to meditate on each part of this remarkable and poetic rendering of the Nativity. I considered that I might compose a work that could exist alongside this creation. I tried to place myself next to each figure and imagine their story. I was amazed at the power and wonder of my own imagination. But I never seemed to get near the major players: the Kings, the Holy Family. It was all those gathered about, but â€˜there’, that played their lives out during those dislocated but frequent minutes of meditation.

My approach to building a musical work around the Nativity was governed by the realisation that this installation was a kind of narrative that brought together simultaneously time past, present and future. It had for sure an historical presence. It had within it a series of narratives found and expressed in the Gospels. It contained elements foretold by the Prophets of the Old Testament. But the lines of perspective drawn from each figure seemed to gather into a point before my standing self; the Nativity and all it contained in story, image and meaning seemed to point to me. So my music had to somehow reflect my life and experience in its luminous aura: the light of the Nativity.

In recent years I have begun to turn more and more to poetry to act as a kind of structural narrative to my musical work. I have even begun to set my own texts. My words adopt many of the ancient Chinese forms of literature in making expression through the concrete description rather than the abstract commentary of feelings.  So my starting point to work on the Wakefield Nativity has been to devise a sequence of poetry that uses eleven of the figures and images to trigger my own experiences, experiences I lay before the tableau, for example: The first song, The Star speaks of a December night on Anelog, a Welsh

mountain that overlooks the island of Ennli, one of the great centres of Mediaeval pilgrimage. It is here that my experience of the Star takes root; not one star, but a bold alarum of stars, galaxies beyond number, and crystal clear in the icy sea-drenched air, The Kings recalls my experience as a chorister at the Queen’s Chapel of St George witnessing royalty and visiting emissaries from distant lands (and usually bearing gifts, which we boys were sometimes allowed to see in the state apartments). These people held to themselves a special poise, purpose, character and awe – never to be forgotten. 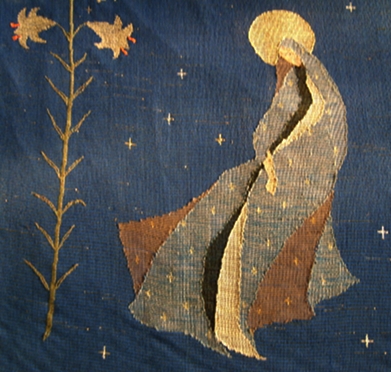 For the song Mary, the Mother of the Eternal Christ, became suddenly real in viewing a sculpture by Kenneth Carter in Exeter Cathedral. Life-size, a homely, strong and purposeful young woman appeared for a moment flesh, blood and bone. If I’d met her in the street I would have held my breath . . . and since then I have. A plain woman touched by God.

This music joins together with other works that feature Advent and the Christmas Story, notably the settings of the Advent and Christmas Collects, and the cantata Text is a Star setting an abridged sermon of  Lancelot Andrewes.