= The Text is a Star – Nigel Morgan
Skip to content

Detail from Edward Burne-Jones’ The Adoration of the Magi.

– a concert-length triptych for church performance scored for soloists, chorus and chamber organ. The Text is a Star is written in memory of Edward Said (1935 – 2004) – ‘A Wise Man from the East’.

Words by Margaret Morgan after a sermon preached before King James on Christmas Day 1622 by Bishop Lancelot Andrewes (transcribed by Dr. Marianne Dorman)

Their errand we may best learn

from themselves out of their

dicentes, which, in a word,

is to worship Him; their errand

our errand, the errand of this day.

The text is a star, and we

may make all run on a star

so that the text and the day

may be suitable, and Heaven

and earth hold a correspondence.

For now we have got us a star

on earth for that in Heaven.

We have taken to heart the star.

Its five beams manifest themselves.

One casts itself from our mouths.

One picks out the glow of faith.

One lights our obstinate feet

and the steps of our painful coming.

One fuels our minds to enquire

each soul to a warm worship. 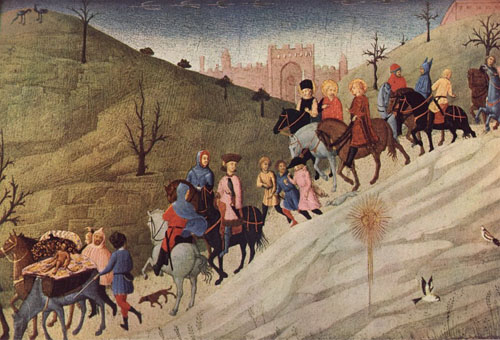 Stefano di Giovanni, The Journey of the Magi (1435)

This is an extract from the words to The Text is a Star, by Margaret Morgan after a sermon preached before King James on Christmas Day 1622 by Bishop Lancelot Andrewes (transcribed by Dr.Marianne Dorman). Download the full text [pdf] 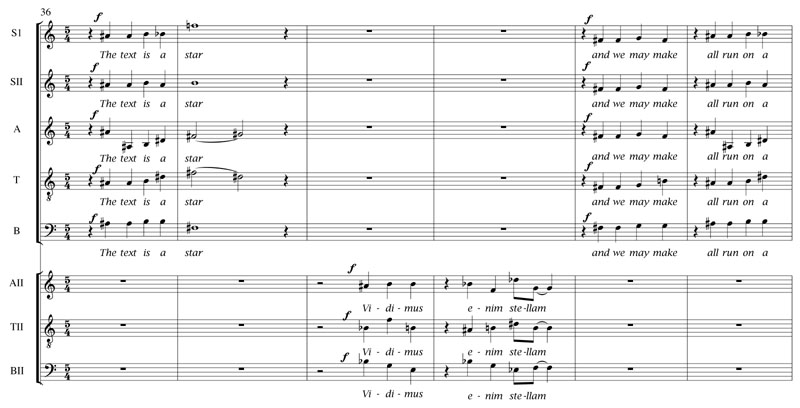 Extract from Part 1 – The Star.

The Text is a Star is a work imagined for church performance. In this respect it might be seen as having similarities to Benjamin Britten’s Rejoice in the Lamb: festive music written for a church choir from which the soloists needed by the piece are taken. There the similarity ends as The Text is a Star is very much associated with Advent, Christmas and Epiphany, and with imagination could be performed in a liturgical setting – for example as part of the traditional Epiphany Procession still held in many churches on the first Sunday of Epiphany. It is equally appropriate as part of an Advent meditation or a Christmas celebration in which the Crib is blessed. Indeed, the crib itself might form the focus of the performance setting.

Text is the Star is cast in three parts: the first,The Star, begins with the three soloists processing from a distant part of the church. The score extract on the previous page is where chorus and soloists meet to sing at the central location for the performance. The music here is sets an extended meditation on the Star, its significance and meaning for us today (the choir) and for the Wise Men (soloists) in the past. The music ends with a glorious hymn in 5 parts: We know the stars of night are stars of heaven, and He the Lord of them is Lord of All.
In Part 2, The Journey, the music is scored for the 3 soloists and chamber organ. The passage shown above is indicative of the rich language of Andrewes’ sermon and of the intricate and virtuoso writing for the chamber organ. A vivid description of the journey itself is set above a ground bass, concluding on the phrase with which T.S. Eliot opens his poem Journey of the Magi: a cold coming we had of it.

Extract from Part 3 – Our Journey.

Part 3, Our Journey , has moments of affecting theatre as the chorus and Wise Men, separately, address the congregation. The text here is the very meat of the sermon. Andrewes asks us not only to to face up to our personal journey of faith but to consider what gifts we have to lay before Christ: Let us see you fall down, let us see what you offer. The music ends with a long section in which Wise Men and chorus come together
in two separate but simultaneous hymns of faith, followed by extended unaccompanied recessional.Bishop Andrewes says at the outset of his sermon for Christmas Day that his ‘text may seem to come a little too soon, before the time; and should have stayed till the day it was spoken on, rather than on this day.’ He then gives four arguments as to why his text is ‘appropriate to this day, and none but this.’ To read the complete text of Bishop Andrewes visit the internet site for the Project Canterbury Library of Anglo-Catholic Theology.

In performances given by a secular chorus and soloists attention to the dramatic nature of the piece should be observed. The Magi might be in costume and make their various processions indicated by the score. The chorus, along with its important spokesperson in part 3, should seek to represent ‘us’.

The use of a chamber organ is called for in the score. Ideally, this should be a small continuo organ with a compass of C-d”” having three stops one each at 8 foot pitch, 4 foot and 2 foot pitch (Stopped diapason; Flute; Gemshorn). The music should, if at all possible, be directed by the organist, the organ positioned appropriately for such an instruction to be implemented. In performances by a chorus of more than 30 voices the use of a larger organ may be necessary. A version of the organ part for string quartet and woodwind quartet is also available.

Margaret Morgan has also just completed a poetic realisation of the texts of two further 17C sermons from the ‘Caroline Divines’ to create a triptych of pieces for church performance. The second work titled No Continuing City is based on a sermon for The Transfiguration by Mark Frank, a contemporary of Bishop Andrewes. The third to be called Weeping No More takes a sermon by John Cosin delivered at a marriage ceremony on the day the Church celebrates the first miracle of Jesus, at the Wedding Feast at Cana.

This triptych – to be called collectively Epiphaneia – celebrates three feast days that fall on the sixth day of a month; each is an epiphany or manifestation of Jesus as the Son of God, even, in the case of the Transfiguration, showing the presence of the other two persons of the Trinity. Each text has a little â€˜embedded’ T. S. Eliot, a homage to him who acknowledges the influence of these preachers on his own work, especially the work of Lancelot Andrewes.You can read here a specially commissioned essay by the author and scholar Dr Marianne Dorman. This text discusses the contextual and historical background to the Epiphaneia triptych, the ‘Caroline Divines’ and their sermons.

The Text is a Star – for soloists, choir and chamber organ. Study Score [pdf]