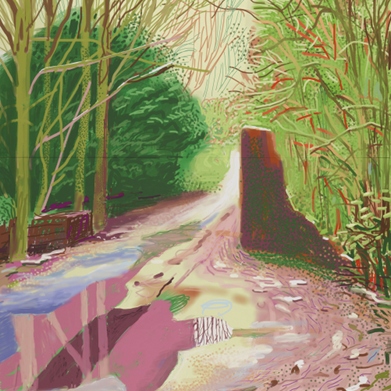 The Arrival of Spring for woodwind quintet is presented here as part 1 January & February, a musical rendering of just 11 of the iPad images. Lasting around 17 minutes it is about one quarter of the projected duration of the final work, a duration somewhat unusual in the repertoire of the woodwind quintet.

The project was a response to the establishment of a permanent exhibition of the 51 iPad images in a gallery at Salts Mill, Saltaire, West Yorkshire, UK, a location already well known for its large collection of work by David Hockney. A performance is imagined taking place in this fine space with the audience able to parambulate informally amongst the images. In other locations it is hoped that the audience will bring their own tablets or iPad computers and follow the work on screen as it evolves.

The opening bars of The Arrival of Spring, part 1.

The Arrival of Spring as a musical score is in three separate parts that may be performed in different combinations to assist conventional concert recital programmes.

Part 1 (January and February) requires an ensemble able to field instrumental doubling: flute with alto-flute, oboe with english horn, clarinet with bass clarinet. Part 2 (March and April) expands the conventional compass to higher registers and so will include doublings for flute with piccolo, and clarinet in Bb with clarinet in E flat. Part 3 (May and early June) uses the standard instrumentation with no doublings. A single and optional extra movement is devoted to HockneyÃ¢â‚¬â„¢s vast oil painting made on multiple canvases.

This requires the participation of any number of amateur wind players and a 5-part vocal ensemble that sing, as a conclusion, A Primavera, the 5-part Italain Madrigal by Heinrich Schutz.

Each iPad image is recognised and indicated in the score by the date on which the image was drawn en plein air. The music during the January images usually presents a three-part form for each image: a 5-part chordal background begins and ends with an inner section between usually devised directly from this harmonic material. This formal plan reflects something of the traditions of the Ã¢â‚¬ËœharmoniemusikÃ¢â‚¬â„¢ for wind ensembles popular in the time of Mozart: a recreational music for outdoor or large indoor spaces.

The trio of 23 February, from The Arrival of Spring, part 1.

Although the work is for the most part notated exactly, players are invited to explore more personal responses to the score: utilising multiphonics, adding colourful timbre effects (vibrato, extreme changes of tone, glissandi and intricate or novel tonguing), ornaments, tremelando on sustained pitches, and Ã¢â‚¬Ëœghost notesÃ¢â‚¬â„¢ where the performer Ã¢â‚¬ËœplaysÃ¢â‚¬â„¢ the gesture of a note or pitch grouping but without sounding the result. Markings for articulation and dynamics in the score are suggested as starting points, no more. Furthermore, transpositions may be applied in either direction as appropriate. This is in line with the performance practice found in many instrumental scores by Nigel Morgan where a limited tessitura is employed – to enable such player-owned interpretations.

Tempo and expressive markings are there to give an initial guide and should not be considered as obligatory.

At the opening the players are asked to find an appropriate balance between the noise of their breath and the pitched note, a form of sound production to be gradually transformed to a normal pitch focused balance as the music proceeds through the eight images of January.