In the early 1980s many composers writing for the guitar were seduced by the appearance of Minimalism and Repetitive Music. Scores such as Leo Brouwer’s El Decamaron Negre and Edward McGuire’s

Music for Guitar(s) and Prelude V demonstrate just how well the guitar is suited to repetitive gestures and modal harmonies. There was, however, a rather uncompromising sub-genre of Minimalism known as Systems Music. This was taken up by several composers associated with Cornelius Cardew’s Experimental Music Catalogue and by ensembles such as Glyn Perrin’s Man Jumping influenced by Louis Andriessen’s work for De Volharding.

Systems Studies for solo guitar grew out of exploring some of this ‘systems’ repertoire and from a realisation that few solo works (for any instrument) existed that celebrated Minimalism in this distinctly purist fashion.

The three studies are designed for performance on an Ovation Stereo Classical Guitar. This instrument has pickups built into its bridge and allows a distinct stereo separation between strings 1 3 5 (right) and 2 4 and 6 (left). This feature is rigorously exploited in the studies: there are often passages where adjacent notes are bounced from one speaker to another at high speed. This stereo-panning should not, however, deter performers using a purely acoustic instrument, although some amplification is recommended. 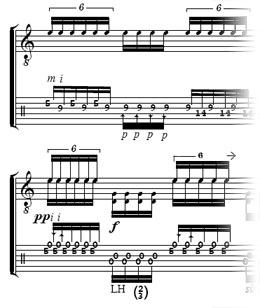 Each study concentrates on a particular technical and/or musical feature: Study I ( The Intellectual Forest) concentrates on additive and subtractive processes using only the pitches of the open strings in standard tuning, in both stopped and open forms. It includes several different forms of rasqueado.

A system of rhythmic grouping is also used. Numbers indicate that the duration of the note is multiplied by that number, for example

6 indicates a note equivalent to a dotted quarter in duration. For example: 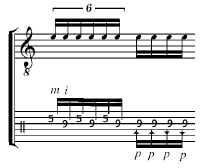 A downward arrow indicates an unusual raqueado using the back of the thumbnail. This can produce inharmonic tones.

Study II ( Chamber of Metallic Integrity) focuses on natural harmonics throughout. The music involves a scordatura in which the high E and B are tuned up a semitone:

Study III ( Sacred Waves of Sleep) is a study in a technique known as ‘two-handed tapping’. On the acoustic guitar this technique has been developed to an extraordinary degree by the Wyndam Hill recording artist Michael Hedges. As far as the composer knows this is probably the only work for classical guitar that uses this technique throughout. Again a scordatura is used: the G is tuned down a semitone. In performance this work has been shown to benefit from the subtle application of digital delay.

Care should be taken to note passages in which the hands cross.

The work was originally composed and made available in Spanish tablature, seen as the easiest way to notate the very precise demands required by the composer for the control of timbre change, often on a single pitch. The tablature also gives the clearest view of the system thinking in use, particularly in Study I. This new edition (2005), made at the request of a number of guitarists, adds staff notation alongside the tablature to clarify the resultant pitches when scordatura is present. However, the original version for tablature alone is available on request. This version circumvents problems with page turning imposed by the dual staff notation and tablature study score.

System Studies was composed for the Venezuelan composer and guitarist Julio D’Escrivan who gave it its first performance in Cambridge in 1985. 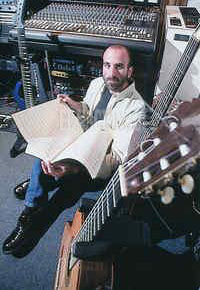