For orchestra and bass voice

Sounding the Deep is the title of a large-scale project devised to celebrate the city of Hull’s signature Millennium building, The Deep submarium. The project will take place in 2012, the year of the UK’s Cultural Olympiad, and provide the city of Hull with a special event that brings together music, the history of the exploration of the ocean depths, and opportunities for participation by youth ensembles in the region.

Sounding the Deep is an initiative developed by Hull Philharmonic Orchestra with the composer Nigel Morgan. It will culminate on the 17th of March 2012 in a unique concert at Hull City Hall. A new work for symphony orchestra and bass voice will be performed twice by the Hull Philharmonic Orchestra, with students from Hull, East Riding and Lincolnshire making up the programme with the premiere of six new works composed specially for this event.

Taking the deep oceans as his overall theme Nigel Morgan discovered the story of the ocean descents made by the remarkable explorer and zoologist William Beebe in the 1930s. The David Attenborough of his day, friend of presidents and movie stars, Beebe was a best selling author and lecturer. His inspirational book Half Mile Down describes his record-breaking descents off Nonesuch Island in the Bermudas. Nigel with Phil Legard has fashioned a libretto of five poetic elaborations from Beebe’s writing including part of the transcript from his national radio live broadcast of his record-breaking descent.

The new score called Sounding the Deep is in five movements of symphonic proportions. It includes a setting of a poem by Deep Sea Diver by Robert Francis, a poem inspired by Beebe’s descents. The score imagines Beebe giving one of his celebrated public lectures in which he tells the story of his dream to explore the deep oceans and how he and Otis Barton descended over 3000′ in a specially built bathysphere. The music contains many novel and newly imagined sounds alongside some of the popular music styles of the 1930s. It promises to be a unique contribution to the current repertoire of orchestral music associated with the sea. 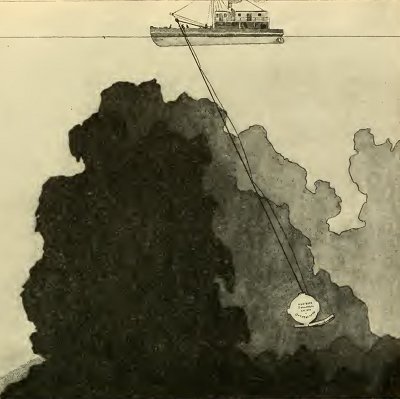 This descent and ascent provides a backdrop for a bass soloist who is imagined as William Beebe himself giving one of his famous public lectures. Beebe explains the wonder and significance of underwater
exploration, relates his own initiation into the kingdom of the diving helmet amongst the coral reefs in the GalÃ¡pagos and Haiti, and finally shares his experience of diving to the depth of a half mile down in a specially designed bathysphere.

You can download the ‘recital’ version of Sounding the Deep, for bass baritone and piano, by visiting this page, and the full orchestral version on this page.

Surrounding the composition of Sounding the Deep is a sequence of vocal and instrumental works: Songs of the Deep for bass voice and piano sets poems by Robert Francis, Rudyard Kipling and Walt Whitman. Shoals is a series of works for student ensembles – a string dectet, a string quartet, a wind quintet, cello and percussion ensembles, and a choir. Migrations, a study for orchestra, completes this sequence and was written to experiment with a mode of orchestration based on register rather than orchestral timbre.