from Anaglyph, by Vasilieous Nikolaou

The Greek composer Vasilieos Nikolaou was for three years a graduate student at York University, UK. He developed a particular interest in the spatial aspects of musical composition and performance. This interestresulted in many unusual experiments that often brought together the sonic with the visual. One such experiment focused on how the techniques of sculptural relief might be transposed to electroacoustic composition and, more ambitiously, to live instrumental composition. The first of his pieces to explore this area was Anaglyph for prepared piano solo, a remarkable composition making extensive use of clusters .

Despite its complex appearance and self-similar structure Anaglyph was composed entirely with pencil and paper calculation. The next stage in the experimental process was clearly to engage with computer-based systems able to model complex fractal algorithms. It was in this context that Nigel Morgan was approached by York University to tutor Vasilieos in the application of algorithmic composition techniques. As a result of this tutorial arrangement Nigel Morgan wrote two compositions as models and examples of how algorithmic techniques might absorb some of the strategies for composing Vasilieos had developed.

from The Terrain of Inference, for oboe and vibraphone.

The first composition using these strategies was a short work for oboe and vibraphone, a piece which became The Terrain of Inference written for David Cowley and Chris Stock of the BBC National Orchestra of Wales. This five-minute study in two parts explores making clusters with algorithmic processes, and how a chromatic tonality might be morphed into a tonality commonly found in Greek folk
music. The title comes from the writings of Greek composer Iannis Xenakis.
The second work was developed out of a decision Vasilieos had made to explore the potential of the Yamaha Disklavier, an instrument he reckoned might well be able to realise some of the complex
textural ideas he was imagining. Over a number of tutorial sessions Vasilieos conjured up ideas and possible instructions to be translated into algorithmic constructs. These experiments were then realised during the tutorials and then refined at a later date by Nigel Morgan into the Four Studies for Disklavier.

In Study One a ‘surface’ texture was generated, a cascade of unique collections of pitches using
the whole chromatic pitch continuum across the Disklavier. This chromatic tonality was morphed collection by collection up two octaves. A surface textures was then applied by varying the articulation (the duration) of each note.

In the Third Study, the ebb and flow of durations are shuffled to produce a rhythmic articulation around the target note. This study provides a surface for the Fourth and final study in which the target notes collect together all previously-sounded target notes. This group, like a massive ornament, is triggered as each target note is reached. The content of this ornamental group is always rotated to start as the appropriate ‘next’ note. At the end of this tutorial process Vasilieos remained unconvinced by the application of computer-assistance to his own composing modus operandi. Sad to see so much work and effort go to waste Nigel Morgan returned to working with the concepts surrounding Vasilieos’ imagined music, and some weeks later Rilievo Schiacciato for Disklavier was composed. The title means ‘flattened relief’, a finely graded low relief where the transitions are compressed and the true relationships of the overlapping parts are to some extent falsified so as to suggest three dimensional effects. This is often found in the work of sculptors such as Donatello. 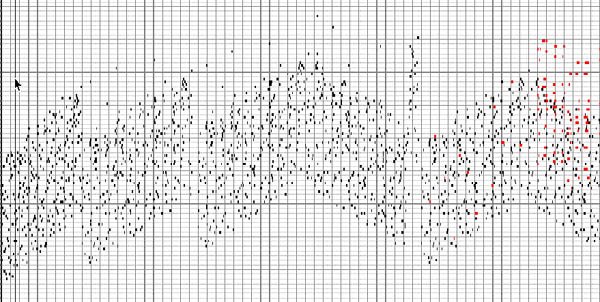 Although this work is designed for the extensive polyphonic capabilities of the latest model of Disklavier it
may also be considered as pure computer music. In the downloadable MP3 file the ornamental group in the complex final study is articulated by random changes of stereo position. In the graphical representation above this ornamental layer is marked in red.