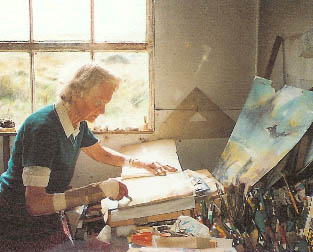 Roger Worsley wrote in her obituary in The Guardian in 1996 (excerpts): “Ray Howard-Jones, an artist of considerable but perhaps still under-appreciated talent, has died at the age of 93. She spent much of her long life struggling against what she experienced as the disadvantage of having been born a woman. She was a mass of contradictions, a very feminine woman who signed her work “Ray” (her Christian name was actually Rosemary) partly to disguise her gender. She was convinced that her technical abilities as an artist were as good as those of her male contemporaries such as David Jones, Michael Ayrton, John Piper and Graham Sutherland. In the end she had the satisfaction of seeing her work in public and private collections around the world.

At 17, she went to the Slade where her teachers included Wilson Steer and the formidable Professor Tonks. Her line drawing was admired as exquisite, fine and detailed… Her real career as an artist, however, did not get going until she was nearly 40… Between the wars she undertook archaeological drawings for the National Museum of Wales… During WW2 she was able to bulldoze her way into being one of the very few accredited women war artists. A collection of her work is in the Imperial War Museum. 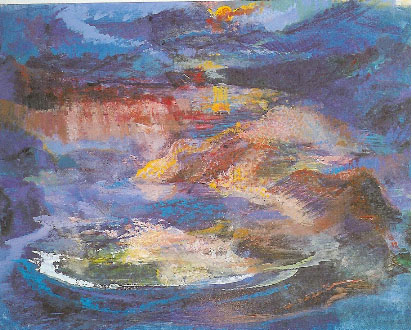 After the war, she went to Pembrokeshire, to the area she had fallen in love with as early as 1915, on a visit to Tenby. From then on, she spent much of her life there, alone or with the photographer Raymond Moore….”

Her stays on Skomer showed her that nature and her deep inner spiritual life as well as Celtic mystery and legends were sources of inspiration. She grew up in Penarth, Glamorganshire during WWI, where she learnt to love the sea and where she first heard of Skomer Island.

[Back to Heart of The Rock]

Strength of Creation, by Ray Howard-Jones.