for voices (SSSAAATTTBBB) and chamber organ

Although the roots of antiphonal singing go back to the early 15C the origins of music for double and triple choirs – commonly known as cori spezzati – are thought to lie in the Psalm settings of Adrian Willaert
published in 1550. Willaert, as music director of the Basilica of St Mark’s in Venice, began a tradition of polychoral composition that reached its zenith in the music of Giovanni Gabrieli (1555 – 1612). This tradition influenced many composers from Northern Europe who visited Venice, notably Heinrich Schütz who studied with Gabrieli for four years and brought the Venetian polychoral style back to Dresden.

The performance of music for multiple choirs of voices and instruments from the galleries of St Mark’s was usually composed for the great festivals and regal visits of the city. A large body of music became established that perfectly articulated the glorious architecture of the Basilica. It also paved the way for the vertical simplicity and emotional affect of harmonic forms found in later choral music of Monteverdi and the instrumental concerti of Vivaldi. 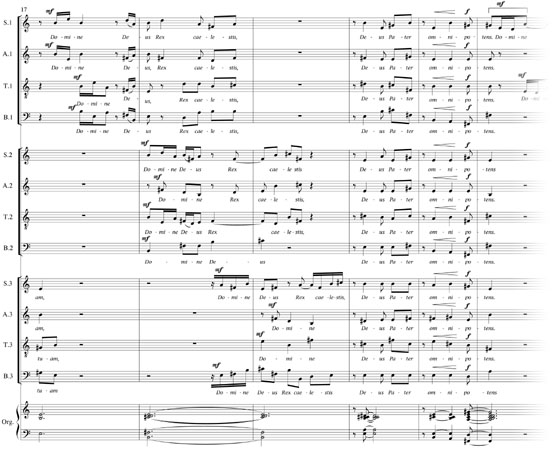 The background to a new Gloria
This new work for triple choir takes its title from a composition by Giovanni Gabrieli written in 1597. Although Gabrieli’s setting may be sung by voices alone it was common practice to double voices with instruments, or indeed replace a whole choir with an instrumental ensemble. In this 21C Gloria à tre cori only the addition of a chamber organ is envisaged. The organ part acts as a subtle reference to the harmonic backdrop and rhythm of the work, altogether a harmonic presence vastly different from its Venetian predecessor.

The score above shows the setting of the words Dominus Deus, Rex Caelestis, Deus Pater omnipotens employing antiphonal and tutti textures with the organ part underpinning the tonality with held chords. Compare Gabrieli’s setting of this text here.

Unlike the setting by Gabrieli, the music for this Gloria is not cadence-led, but adopts an organic transformation from symmetrical tonality patterns of 3, 5 and 7 tones. The harmonic abstract of the opening 15 bars shows something of the technique employed here. The chords serve as a foundation for melodic as well as harmonic content. The final bar shown above presents the seven-tone chord used for the setting of the words Jesu Christe, which occurs twice in the text of the Gloria. In the final section in Gloria Dei Patris each choir adopts its own 4-tone tonality pattern creating. if only momentarily. polytonal music.

The Gloria has been imagined for and is dedicated to the choirs of York Minster, Ripon and Wakefield Cathedral who will come together to celebrate the 120th anniversary of the Diocese of Wakefield on 17 May 2008.

Less ambitious renderings of this work can be imagined and are encouraged. As recent voice-to-a-part performances and recordings of multi-choral works by Tallis and Striggio have ably demonstrated, this medium is alive and well and still manages to stir the most jaded listener into acknowledging how our heritage buildings come alive to such choral invention. 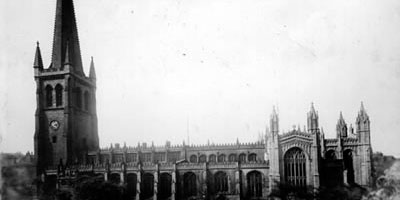 Although only Choir 2 is shown here in bars 64-69 the organ part displays the polytonal entries of choirs 1 and 3.

The score of this Gloria is prefaced by a quotation from one of the Sermons for Christmas Day preached on the text of Luke ii:14 before King James in 1612 by Bishop Lancelot Andrewes.

But otherwise, this day in this hymn, and this hymn in this day continually have a special interest. Time in music is much. And if we will keep time with the Angels, do it when they do it – this day they did it;. and what fitter time to sing it than the day it was first sung, the day of the first singing of it. Canticum diei, in die cantici. When

should the hymn of Christ’s birth be better sung, than on Christ’s birth day? This is a powerful reminder of the context surrounding the opening lines of the Gloria, which became a touchstone for this new musical setting. It joins Nigel Morgan’s settings of Cranmer’s texts for the Advent and Christmas Collects and The Text is a Star a festive cantata for Christmas and Epiphany based on the sermon by Lancelot Andrewes from which T.S.Eliot took lines for his poem Journey of the Magi. 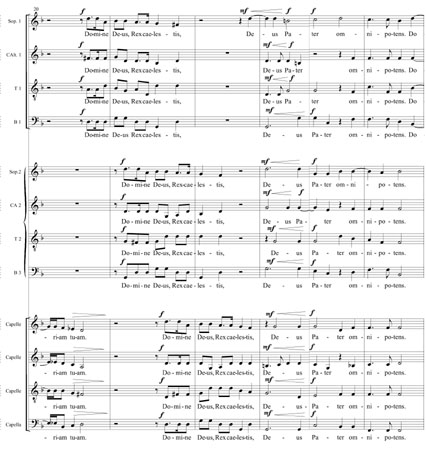 A reference recording in MP3 format and a MIDI file is provided here for rehearsal purposes.