Love them or hate them as a parent you certainly can’t ignore Pocket Monsters! For my two boys aged 9 and 12 PokÃ¨mon has been part of their waking lives for several years. Their knowledge of the mechanism of the game, its characters and their evolutionary tendencies is encyclopaedic. For them the beautiful game is certainly not football, it is PokÃ¨mon.

The contemporary world, with its ever evolving digital media and browsing culture, can be a challenge for the composer of concert music who observes a tradition of practice and technique that looks back several centuries. Occasionally a composer will confront the past and devise a music which speaks with eloquence about the here and now. For me, one such composer has been the American composer/improviser John Zorn. His musical world has included, variously, elaborate musical games between teams of improvisers and themed pieces often based on film scores, fictional characters or genres. 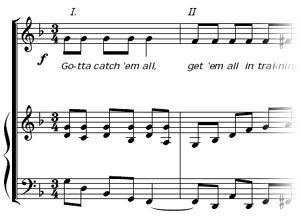 reflects on the PokÃ¨mon phenomenon and explains something of what it is within a short choral work for young singers. Much of its language and its rationale is rich in musical and poetic possibility. It is also a little exotic and we hope it will be entertaining too! The
Songbook can form the basis of a longer work with extended musical and theatrical possibilities. To this
end an accompanying resource collection of ‘authentic’ PokÃ¨mon music, sounds, images and texts is to be made available.

Pocket Monsters Songbook was commissioned by Ysgol Gyfun Emlyn as
part of a three month education project to involve members of the BBC National
Orchestra of Wales. 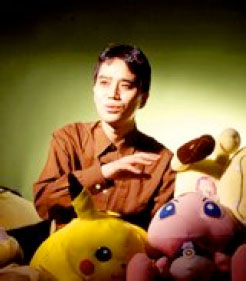