For flute and guitar.

The title refers to a sequence of night services associated with the Divine Office still celebrated in some monastic communities during Holy Week. The Nocturns are part of Matins and are celebrated as an extended meditation of antiphons, psalms and readings. On Maundy Thursday there are two Nocturns during which Psalms 69 -72 are intoned and passages from the Lamentations of Jeremiah read. At the conclusion of each psalm a candle is extinquished . . .

When I composed this work in 1972 I had not experienced for myself the special quality of the ‘night office’. It was something I had only read about in devotional literature. The ‘idea’ captured and played on my imagination then as a ‘context’ within which music might be made and performed. During Holy Week 2005 I witnessed the Nocturns sung by the Benedictine sisters of Stanbrook Abbey in Worcestershire and in my diary wrote:In the early hours the psalm tone is a single note. The words flow into one another and the acoustics of Pugin’s chapel play tricks with the ears. Voices break into quarter and eighth tone clusters that reform themselves miraculously at the end of phrases. Click here to read more about Holy Week at Stanbrook Abbey. 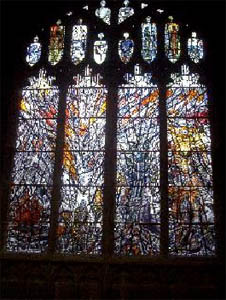 In this score there is an absence of dynamics, tempo and expressive indications, and in the first two movements the marking of articulation. The title
Nocturns suggest performers and listeners imagine something of the ritual of these special services of the night office. Ideally the music might be performed in candlelight, with slight amplification and signal processing to give the illusion of the music being played in the spacious acoustic of a church. Thus, the omission of expressive indications appropriates Plainsong in which the words and the shape of the music is all the performer has as a guide.

That said, the music abounds with devices that seek to both constrain and encourage the performers towards realising the music in particular ways. In the
First Nocturn there is extensive use of Elliott Carter’s device of metrical modulation. This produces a unique metrical drama and temporal illusion that has something akin to certain effects found in plainchant performance. Likewise the use of ornamentations and inflections is a response to that rich tradition of unaccompanied vocal music.

In the First Nocturn both instruments play solos that are polyphonic. In the guitar solo (bars 71 – 82) there is a cantus-like figure that ascends slowly through three octaves around which the other voices weave figures and variants. This recalls the extraordinary contrapuntal intabulations of Josquin by Francesco di Milano. In the flute solo (bars 51-54) a two-part texture is created that unfolds in its final bar into three voices, an effect much enhanced by a spacious acoustic. 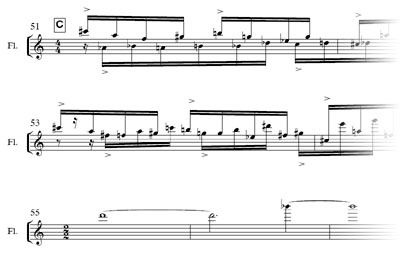 After the rhythmic intricacies and tempo complexities of the First Nocturn the music of the Second Nocturn is direct and simple. Long phrases are punctuated by moments of silence and repose. These two instruments of very opposing sonorities play homophonically, gradually breaking apart melodically to produce different attitudes of register and timbre. In the latter part of this Nocturn the illusion of several different voices going on in each instrumental part is played out. 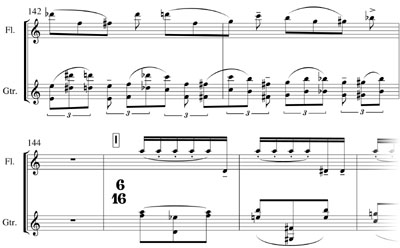 The Third Nocturn associates timbre and articulation with pitch; a kind of timbral serialism. The flute applies different types of articulation to three series of 4-notes. The guitar associates its three series with distinct timbral qualities found by striking notes in different locations in relation to the soundhole. The constraints of this hyper-formal approach makes for many unique textures and sonic moments. 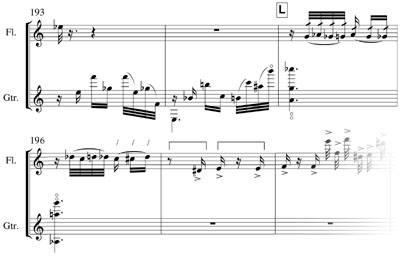 was written for Tim Walker and Judith Pearce and first performed at the SPNM’s 25th birthday celebrations at the Queen Elizabeth Hall. It has subsequently been performed many times by the composer and the Canadian flautist Richard Land for whom a companion work, Matins for solo flute, was written in 1974. 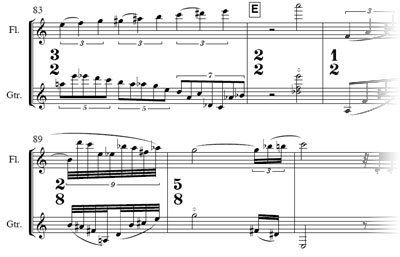