<objectclassid=”clsid:D27CDB6E-AE6D-11cf-96B8-444553540000″codebase=”http://download.macromedia.com/pub/shockwave/cabs/flash/swflash.cab#version=6,0,0,0″height=”45″ width=”20″>
In 2011 Nigel Morgan embarked on a large-scale project to create a series of works about the early explorations of the ocean depths. The centrepiece of this project is a work for bass voice and orchestra called Sounding the Deep. In this twenty-minute piece, the soloist takes the role of the explorer and zoologist William Beebe who made the first deep ocean descents in the 1930s. Surrounding the composition of Sounding the Deep is a sequence of vocal and instrumental works: Songs of the Deep for bass voice and piano sets poems by Robert Francis, Rudyard Kipling and Walt Whitman. Shoals is a series of works for student ensembles – a string decet, a string quartet, a wind quintet, cello and percussion ensembles, and a choir. Migrations, a study for orchestra, completes this sequence and was written to experiment with a mode of orchestration based on register rather than orchestral timbre.

Contrary to the composer’s usual way of working a two-piano version of Migrations was prepared first. This demonstrates how the orchestra is split up into three registral groups: high, medium, low. It further reflects the composer’s long held belief in making his music more transferable and accessible. Before the age of recording it was commonplace for a composer to prepare keyboard and chamber versions of orchestral scores. Beethoven’s symphonies were published in piano duo and piano trio versions. Brahms made piano duet versions of all his orchestral scores. Because of both recording and the primacy of timbre in the compositional act such practice has become unfashionable, some would say unnecessary.

Migrations is in five distinct sections: Descent 1, Descent 2, Descent / Ascent, Ascent 1, Ascent 2. Each section features a different register:  High, middle, low, middle, high. The orchestral score is described as a study and as such offers a unique configuration for study purposes. The music for each registral section can be played and should be rehearsed independently. This is achieved by using the continuo forces the composer has featured in all his large-scale instrumental and orchestral compositions since 2001. 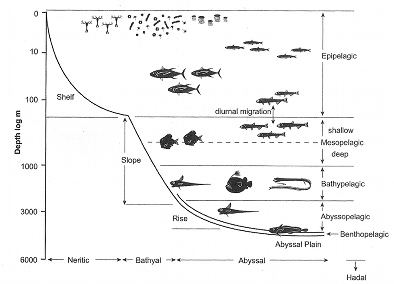 Ecological zones of the ocean, from The Silent Deep, p.44.

The title Migrations refers to a passage from Tony Koslow’s book The Silent Deep. In the section on the role of light and vertical migrations, Koslow describes â€˜the most massive animal migration on the planet’:

The mesopelagic fauna is a transitional fauna, its ecology closely linked to near-surface waters. Most species of mesopelagic fishes and crustaceans only spend their daylight hours in 1000 meters depth, swimming into-near surface waters at night to feed. This daily upward movement at sunset – and their subsequent descent around dawn – is the most massive animal migration on the planet, involving some hundreds of millions of tonnes of animals each day.