Matins is the first of the nine ‘hours’ of the Divine Office. In the early monastic church this service was ‘composed of the Psalms with their seasonal antiphons, the official hymns of the Church, and various lections from the scriptures and writings of the Fathers’ (Alan Watts. Myth and Ritual in Christianity. Thames & Hudson). The essential elements of Matins are the Pater Noster, Ave Maria and Credo. On Maundy Thursday and for two days afterwards these are said in silent recitation prior to the singing of the Psalms and antiphons of the Nocturns.

Matins was composed as an extended introduction to Nocturns for flute and guitar (1972). It was written for the Canadian flautist Richard Land who has the unique ability to produce harmonics of remarkable clarity and precision. The first performance of the work was given at the blessing of the composer’s marriage to Margaret McPherson in Thaxted Church on 30 August 1974.

Tempo, dynamics and the application of harmonics are left to the discretion and imagination of the performer. 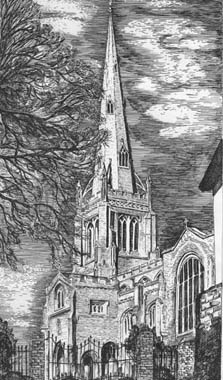