= Many Years and No Turning – Nigel Morgan
Skip to content

For Male Voice, Viola and Percussion. 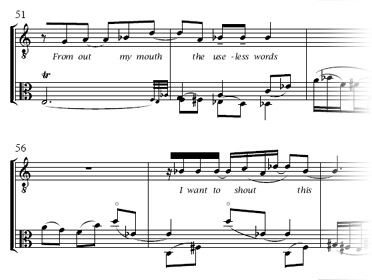 This work acts like a full stop to a series of chamber music compositions written between 1971 and 1974. These include Matins,  Nocturns, Sonnances, Asperges and Tapisserie. This score was written for the celebrated tenor Robert Tear, whose creation of the role of Dov in Michael Tippett’s The Knot Garden was fresh in my mind when I wrote Many Years…

This extended song also provided a preparation for writing the incidental music for Larry Butler’s translation of Beowulf devised for performances by Christopher Leith’s Puppet Company at the opening of the Cottesoe Theatre on London’s South Bank. For this project I had a singer, a harpist and and a percussionist. Music from this score commissioned by the National Theatre can be found in my duo for guitar and percussion Beowulf Music.

Many Years and No Turning. is an uncompromising piece. It is a soliloquoy: a poet questions his creative life and his way of living. When I read this work in the poet’s cottage in rural Essex, a location near where I was living at the time, it seemed to say so much about a shared situation; we were both on the cusp of change. The moment I read it I knew I would set it . . .

In 1972 Gerry Loose created the libretto for my children’s opera Monkey. He is a scholar of Japanese and Chinese literature and has produced many celebrated translations, most recently The Botanical Basho, (edited and English versions of Japanese poems by Gerry Loose (with Toda Yoshin), Botanic Gardens Press, Glasgow, UK, 2001) Gerry Loose is now one of the leading exponents of renga, a highly formalised technique of collaborative poetry making. A lifelong gardener and conservationist, his publications include Tongues of Stone; a measure; The Elementary Particles; and The Holistic Handbook for Scotland. From July to September Yorkshire Sculpture Park will be exhibiting Gerry Loose’s Seed Catalogue.

Many Years and No Turning study score [pdf]