This psalm setting for 4 solo voices was composed in 2002 for Astrid Kvalbein, Anine Kruse, Magnus R. Stavland and Kjetil Grøtting. These four singers from Det Norske Solistkor, Oslo, formed the solo quartet of Schizophonia, a large-scale choral and instrumental work co-commission by BBC Wales and the ILIOS Festival Norway.

The music was devised using the interaction of Symbolic Composer, the first vocal score by the composer to be created in its entirety using this computer environment. In this setting the pitch and tonality material has been formed from a symbolic rendering of the white-noise fractal. The following scale in different transpositions is the basis of the tonalities employed throughout the work.

In composing this work it was the intention from the outset that the music would be playable by instruments or a combination of instruments and voices, echoing the practice of Renaissance times. An instrumental version of this setting can be found in Quatour des Timbres. 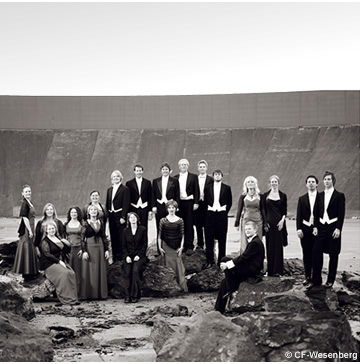 VATICAN CITY, January 30, 2002 — Creation is an open book that speaks of God´s beauty, John Paul II said during today’s general audience when he meditated on Psalm 19.

1. The sun, with its increasing brilliance in the sky, the splendor of its light, and the beneficent warmth of its rays, has captivated humanity since the beginning. In many ways human beings have manifested their gratitude for this source of life and well-being, with an enthusiasm that often reaches the height of authentic poetry. The wonderful Psalm 19, the first part of which we have just proclaimed, is not only a prayer in the form of a hymn of extraordinary intensity; but is also a poetic song addressed to the sun and its shining on the face of the earth. In this way, the Psalmist joins a long list of singers of the ancient Near East, who exalted the day star that shines in the skies, which in their regions long dominates with its burning heat.

It reminds us of the famous hymn to Aton, composed by Pharaoh Akhnaton in the 14th century B.C., and dedicated to the solar disc regarded as a divinity.

However, for the man of the Bible, there is a radical difference in regard to these solar hymns: The sun is not a god, but a creature at the service of the one God and Creator. Suffice it to remember the words of Genesis: “Then God said: Let there be lights in the dome of the sky, to separateday from night. Let them mark the fixed times, the days and the years.´ … God made the two great lights, the greater one to govern the day, and the lesser one to govern the night. …And God saw how good it was” (Genesis 1:14,16,18).

2. Before going over the verses of the Psalm chosen by the Liturgy, let us look at it as a whole. Psalm 19 is similar to a diptych. In the first part (verses 2-7), which today has become our prayer, we find a hymn to the Creator, whose mysterious grandeur is manifested in the sun and the moon. In the second part of the Psalm (verses 8-15), instead, we find a wise hymn to the Torah, namely, to the Law of God.

Both parts are suffused with a common theme: God illuminates the universe with the brilliance of the sun and illuminates humanity with the splendor of his Word contained in biblical Revelation. It is almost like a double sun: The first is a cosmic epiphany of the Creator; the second is a historical and free manifestation of the Savior God. It is not accidental that the Torah, the divine Word, is described with “solar” tones: “The commandment of the Lord is pure, enlightening the eyes” (verse 8).