Hexagrams comes from an on-going collection of music for instruments titled Instrumentarium Novum that aspires to re-examine some of the conditions for music making in our time. Instrumentarium is a term used by the conductor and scholar Nickolaus Harnoncourt to describe the common-place collection of instruments and performance practice found in Baroque and early Classical music. Here there was an expectation that music would be enriched by all the instrumental variety and timbral variation the imagination of musicians could muster. Instrumentation and performance detail rarely dictated the nature of the music itself. Matters such as instrumental doubling, register placement, chord voicings, dynamics and articulation held a more speculative interpretation in the composer’s mind.

Such a speculative approach has been celebrated in the composition of six works that take as their starting point the proportions and spirit of the concertos for mixed instrumental ensemble found in the music of Bach and Vivaldi. As in Vivaldi’s celebrated op.8 concertos there is in play a contest between harmony (technique) and invention. This is amplified by the hexagram images attached to each concerto taken from the ancient book of divination, the I Ching. These images and their interpretation provide a kind of rhetorical affekt, giving a gentle measure of guidance to both performer and listener as to the overall character of each concerto. 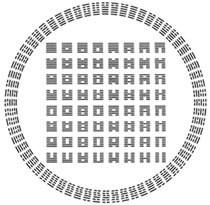 Hexagrams reinvent the first three of the six concertos for the medium of the piano duo. Such a reinvention was implicit in the initial composition of the concerto sequence as a way of testing the effectiveness of musical argument against the play of instrumental timbre found in the two companion versions for orchestra and for instrumental octet. The description ‘for piano duo’ rather than ‘two pianos’ further suggests that additional or different instruments (and players) may also be used alongside 2 pianos. This might include tuned percussion, or electric keyboard instruments able to trigger sampled or synthesized sounds.

The scores presented here should be regarded as like dramatic scripts in which the pitch and rhythm of the music is fully set out, but the detail of performance interpretation kept to a minimum. Indications of tempo, expression, dynamics, and articulation should be considered as a starting point for a personal interpretation.

Click on the individual hexagram to find out about its meaning and possible interpretation:

To read more about the I Ching, click here and here.

In the third hexagram K’un / The Receptive the score invites its performers to go a step beyond the  conventional response to a notated score. Unlike the first two Hexagram concertos, K’un / The Receptive is made entirely from sequentially evolving material: there are no repetitions or reprises. Thus, the performers may extend their interpretation of this score with a number of possible strategies. These are illustrated in a realisation of a single page from the third movement of the score.