Complexity and the predominance of the sonic over the musical continue to deny many musicians active and progressive relationships with experimental forms of music. Music appears to have regressed to the state similar to that in the 14C where only specialists can perform. The authors reject the view of Ferneyhough on ‘active listening’ that asserts the authority of the CD recording over the personal experience of realising and exploring music at an instrument (Ferneyhough 1993). They consider this ‘passive listening’ which does little to progress real musical skills or understanding. They propose a re-evaluation of the way musicians acquire a working relationship with the languages, techniques and concepts of existing and developing experimental music forms. This will be articulated as a dialogue between a composer and performer designed to show methods of extrapolation and regeneration from a single composition using both traditional and computer-assisted techniques. 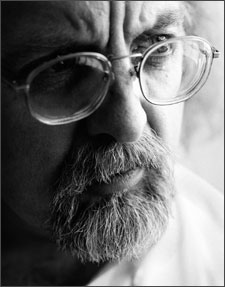 This paper brings together composition and performance with musical thinking and learning in an exhortation to ‘get our hands on the music’. It does so in the belief that to build visions for the future we should consider a more dynamic linkage between these activities.

Much of the music produced over the past 40 years has proved inaccessible to all but a minority of commited performers. Complexity of texture and rhythm and the predominance of the sonic have moved us from active discovery at an instrument to passive submission before the edited ‘perfection’ of the CD. In music education this has particularly serious implications. Students experience so much at one remove from the actuality of music making and rarely begin that private search and encounter required to unravel music’s new scripts and scenarios.

To focus our exhortation we will consider an extract from a recent interview with the composer Brian Ferneyhough. We will then propose a re-evaluation of the way musicians might acquire a working relationship with experimental music; that is music whose content and method may be both radical and innovative.

This re-evaluation will reflect an evolving dialogue between a composer and a performer as they prepare a new work.

Ferneyhough’s own response to the dilemna of ‘touching the music’ draws the comparison between the 20C listener with their CD recordings and the 19C amateur performer who explored new music through transcriptions. In complex music, Ferneyhough says, successive listenings convey details that gradually extrapolate into larger states. We actively absorb and recuperate what we hear. Our bodies become increasingly involved in the learning process.

In this response we hear a composer providing listeners with a rationale for avoiding an encounter with the raw text of his music. To simply audition a performance appears to us to deprive the musician of so much of the potential inherent in the music. And, in the case of Ferneyhough’s own notated scores, that potential is further defused by the very density and complexity of its information. And, its apparent denial of space for interpretation.

Although Ferneyhough repesents a most extreme view of linear complexity, the problem extends widely to musics that in their sonic, rather than musical origins, assume both a form and content that make extrapolation, regeneration or transcription to a solo instrument unthinkable. When the sonic is the musical message we may be left with very empty gestures if we remove the particularity and disorder of timbre. Imagine John Cage’s Sonatas and Interludes without the intervention of thumb tacks!

Our proposition is that we should examine strategies that allow even the most complex music to be encountered in its raw state. We should seek ways to encourage, rather deny, performers the opportunity to interpret and communicate a vision of the music.

These strategies, we suggest, may need to become present at the heart of music education.

In developing this approach we are exploring two distinct strands. The first concerns the content of a composition and the way both composer and performer view the notion of a work’s permanence as an organised, but unchangable statement. The second embraces developing ideas current in education generally about the very dynamics of thinking and learning, but applied to the process of interpreting a musical composition.

Our work comes out of a response to the complexity and density that began to take over my own composition for solo piano, . . . touching the distance. Like Ferneyhough talking about his Carceri d’Inventione, I too was putting into this ‘as much as I could’. And this realisation brought about a conscious move to seek methods of extrapolation and regeneration so that the composition might have a greater ‘potential’ for communication, interpretation and transferance. The result is a set of studies (for private
practice) and adventures (for performance). A collection of material providing a musician with new sources for study, it seeks to engage matters at the heart of the problem areas of complexity and goes some way to reveal the mechanisms inherent in the music which, as we will see later, the performer can directly manipulate.

By reducing the information density and the composer’s instructions for interpretation composer and performer have come together into a community of inquiry.

This term, much used by the educational theorist Matthew Lipman (1991), describes the conditions for:

– listening to one another with respect;

– building on each other’s ideas;

– challenging one another to supply reasons for otherwise unsupported
opinions and musical statements (interpretative or composed);

– assisting each other in drawing inferences from what has been said
and played;

– seeking to identify one another’s assumptions.

The result of this mode of inquiry has been two-fold. We found we were seeking the poetic utterence of a dramatic soliloquoy where pace, inflection, surprise, attention seeking, and attitude became our formal vocabulary. Also, our attention focused not on an outcome, that product we call performance, but on process; we found we were problem seeking rather than problem solving.

The studies and adventures derive from the intervention of a computer application (Morgan, Stone 1994) able to process the composition’s original material into a symbolic form. From this store of data elements were extrapolated for regeneration into formal studies.

Each study exists as a program written in a functional computer language. In this language symbolic and numerical data are compiled to a standard MIDIfile.

As this simulation of a study has perfect note-durations scorewriter transcription can be virtually instantaneous. Thus, in the first study where a single tonality is engaged in a complex invention between the two hands, the performer can in a matter of a minute or two recompile the program and process the Midifile output in a scorewriter to initiate a new version using any one of the 68 tonalities present in the composition.

From the opening of Study 1.

The second study is a transformation from one tonality to another. The player can choose start and end tonalities, and the order and incidence of new tones. Also, from the start of the following extract, you’ll hear the simple patterning break out into a four part texture.

In the third study there are again two tonalities but the central section of the music explores their commonalities:

Here are the two tonalities as arpeggios . . . . and we’ll hear just one section of commonality:

A section from Study 3.

In the 4th, 5th and 6th studies the last tonality we heard (play chord) is processed to produce a series of self-similar tonalities. In the 4th the chordal music may be rhythmically ornamented and expanded registrally to explore and reflect the player’s own developing perception of the harmonic motion (which owes nothing to the traditional conventions of harmony).Again, it’s possible for the player to initiate a new version of such ornamentations. Here is the complete movement.

Studies 5 and 6 articulate within this rich tonality field extrapolated rhythmic patterns or ‘objects’ from the original composition. In the 5th the rhythms are divisive, in the 6th they are predominantly irrational.

The player may alter the heuristics which govern the patterning of these rhythms either in seperate studies or indeed combine the two. Here are the opening sections from Study 5 and Study 6.

Finally, in Study 7 we view a single tonality, but transposed chromatically into every position of its own scale.

Again, the incidence and degree of transposition can be controlled by the player.

– we believe we have a method of score analysis that
provides the potential for regeneration into discrete and less complex
forms;

– where complexities of rhythm, dynamics or multiplicity of activity
exist these elements could be re-presented to allow the performer to
establish a more secure and informed initial relationship with them;

– technological simulation of material is able to provide not only an
aural image but a means to examine layers within a texture, and reinforce
practice and learning;

– we believe that a community of inquiry between composer
and performer can be highly effective. It can replace the need for a
composer to overlay complex interpretative instructions, thus, encouraging
ownership and commitment;

– this community of inquiry should ideally extend from performer to
student, or be documented in an audio-media format;

– the performer should have the interpretative space to evolve a personal
response to the raw text and be encouraged to problem-seek rather problem-solve.

Of course, composers continually seek obligation and commitment from performers. But composers are notoriously intransigent . . . . Perhaps they need:

– to provide more realistic materials from which performers
can work, learn and think;

– to investigate both human and computer-based techniques of analysis,
extrapolation and regeneration;

– to set up a community of inquiry with performers and other composers
as both a support and a feedback loop to further their adventures into
the future:

These provide some of the basis conditions for us to get our hands back on the music . . . .

To underscore this spirit of adventure we finish with a complete performance of the studies and one of the 7 Adventures from the first movement of Touching the Distance. Here, the computer application synthesises the material of all previous seven studies into a continuous whole. In this version the appearance of each study is weighted equally; the performer however, can explore further potentials of the material by adjusting the weighting to favour one or more studies.