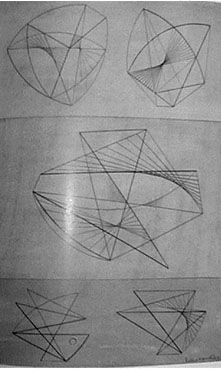 dressed in black and proud as sin.

I saw the sun walk across London

His step was light, his tread was dancing,

his lips were smiling, his eyes glancing.

Over the Cenotaph in Whitehall

the sun took the wicket with my skull.

The sun plays tennis in the court of Geneva

with the guts of a Finn and the head of an Emperor,

the sun plays squash in a tomb of marble,

the horses of the Apocalypse are in his stable.

The sun plays a game of darts in Spain,

three by three in flight formation,

The invincible wheels of his yellow car

are the discs that kindle the Chinese war.

The sun shows the world to the world,

Turns its own ghost on the terrified crowd,

then plunges all images into the ocean

of the nightly mass emotion.

Games of chance, and games of skill,

all his sports are games to kill.

I saw the murderer at evening lie

bleeding on the deathbed sky.

His hyacinth breath, his laurel hair,

his blinding sight, his moving air,

my love, my grief, my weariness, my fears

hid from me in a night of tears.

After an improvisatory introduction for solo keyboard the opening of Far Darting Apollo demonstrates how contrasting intervals of the major third and diminished fourth (acoustically the same on the keyboard) provide a playful ambiguity that is developed throughout the song. References to Walton’s Façade, flamenco and a passage marked risonare orientale abound, the song ending with lines my love, my grief, my weariness, my fears’ accompanied with relentlessly falling passages of sixths.

[Back to Stone and Flower]