This is the penultimate concerto in a sequence of six. Completed in July 2005 the score features a concertante movement for two percussionists.

As the concerto sequence moves into its closing stages the completion of the fifth concerto brings with it further innovations and developments in this imaginary contest between technique and invention.

The concerto opens with rather dark and subdued music featuring lower brass and strings. For the first time in the sequence, the repetition of musical phrases is mirrored in their orchestration; previously repeated material has always been presented in different arrangements of instruments. In the fast second movement this factor is again present but the organization of both musical phrases and its orchestration is the result of algorithmic structuring. This structuring comes from mapping the image of a sine-wave modulated by a ramp wave on to the arrangement of the musical content. 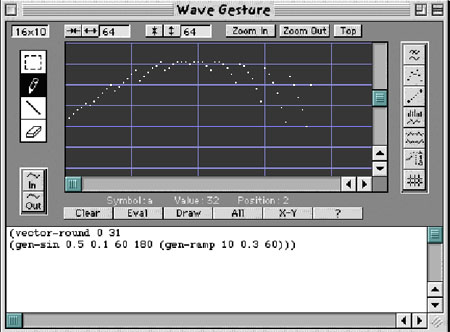 We are used to thinking of musical structure symbolically: sections A B A C C A and so on. Now imagine if such symbolic ordering could be generated by an algorithmic representation from sound synthesis: to produce the ordering of a 60 part structure from a source collection of 32 discrete musical phrases. Here is the output in integers of such a synthetic representation:

Another device unique to this concerto is the use of a processing function that enables phrases to be placed additionally as anacrusis before a phrase is presented, or as an echo immediately after a phrase position. When a short phrase is echoed across a large phrase a web of repetitions occur that gradually fade away into the new texture that is developing. This produces the musical equivalent of a cinematic cross-fade. 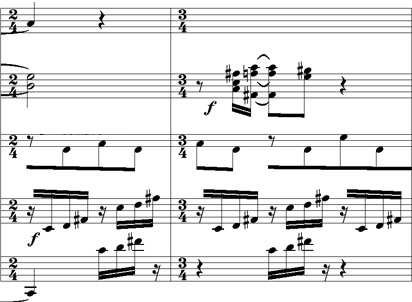 In the slow third movement the percussion section play a concertante role throughout. Their music contains flurries of 16th and 32nd figures set against a continually varying dynamic scheme. The remaining orchestra surround this rhythmic action, commenting and interacting, in one of the most colourful and unusual movements of the series so far.

A version of this concerto will be available in September 2005 for 2 pianos and 2 percussionists called Glossolalia – the gift of tongues.

Click here to find out more about the Instrumentarium Novum sequence and to download a study score and MP3 recording.