Despite the best efforts of Suzanne Stephens and Harry Sparnay there are still relatively few solo works for this beautiful and expressive instrument. Basilisk was written for the clarinettist John Chapman who gave it its first performance in Cambridge in 1978. It was recorded in 1986 by his student Gareth Stuart and it is this recording that features in the opening section of the composer’s Arts Council commissioned radiophonic documentary Spring Manouevres. 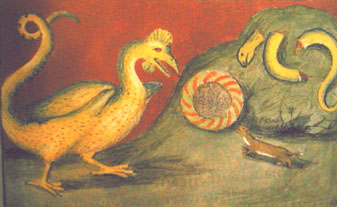 Basilisk, that ‘fatal orphan of a deadly serpent\, is a particularly grotesque invention. Such a character calls out for an equally grotesque and alarming sonic presentation. For this reason the performer is encouraged to consider using amplification and signal processing to enliven the timbre and the sonic space. There are minimum markings present in the score; the tempo markings and phrasing are guides, no more. Dynamics are entirely free but suggested in the contours of the instrumental writing and in the texts of the two poems that make up The Basilisk.

Above all, the performer should consider approaching the score as an actor might deliver the script of a soliloquoy. The Basilisk is, in essence, a highly confrontational piece of music theatre. The work is written as transposed for the bass clarinet in Bb sounding a major ninth lower than written.